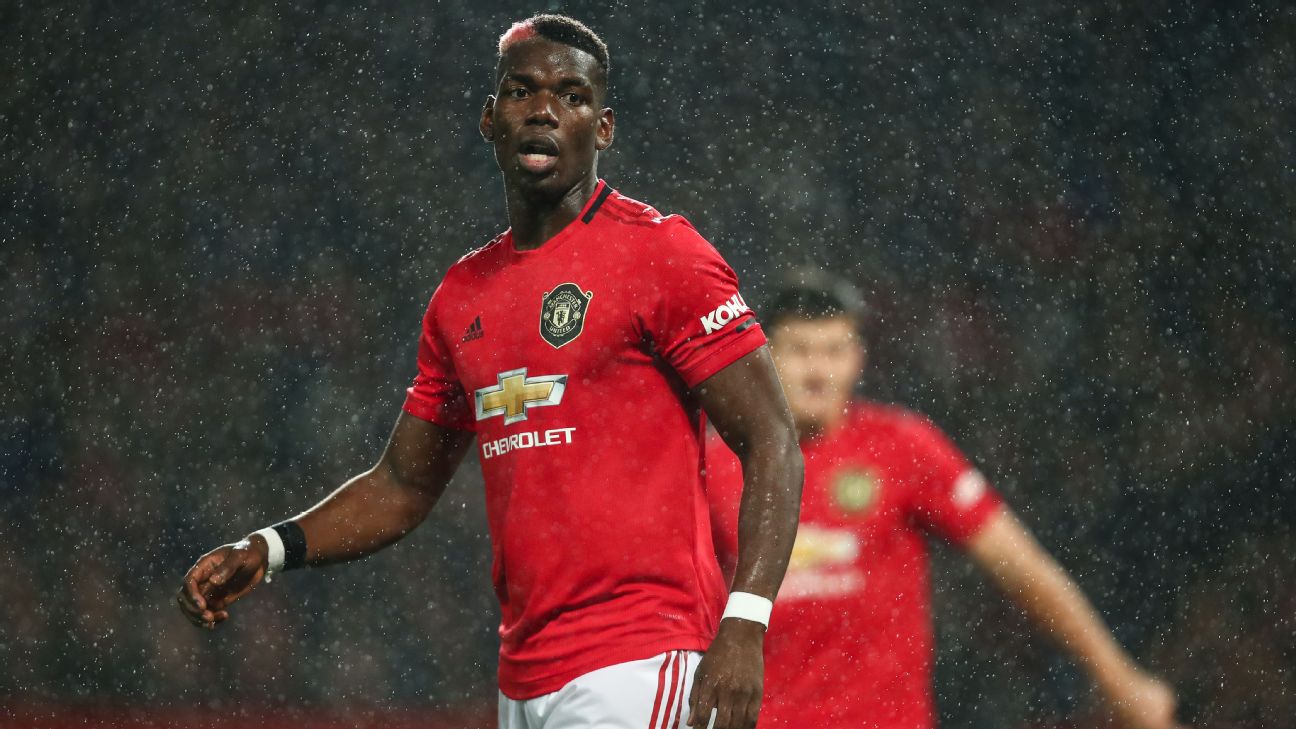 Paul Pogba is back, or back in Manchester at least. After spending over two months on the sidelines with an ankle injury, the Manchester United midfielder was a spectator at the Etihad Stadium on Saturday as his team extended their recent revival with a 2-1 derby victory against Manchester City.

He has divided opinion by undergoing his rehabilitation in different corners of the world, posting videos of exercise bike sessions overlooking the Dubai skyline and shooting hoops with Miami Heat star Jimmy Butler in Florida, before getting back to more mundane fitness work at United’s Carrington training ground.

Pogba had United’s permission to travel during his rehabilitation period and sources have told ESPN FC that manager Ole Gunnar Solskjaer and the club’s medical staff have no issue with his professionalism and commitment to his recovery programme.

If he trains without a setback this week, the 26-year-old is likely to be in the squad for United’s Europa League game against AZ Alkmaar at Old Trafford on Thursday.

While Solskjaer claimed last month that having Pogba at his disposal again will be like having a “new world-class signing,”  the reality is that the France international’s imminent return to action could cause more problems than it actually solves.

How he handles United’s most high-profile player will be a challenge, especially now the team appears to have turned the corner following a turbulent period on the pitch.

United have been wildly inconsistent during Pogba’s lengthy spell in the treatment room. Since his last appearance, during the 1-1 home draw against Arsenal on Sept. 30, United have played 14 games in all competitions and won half of them — losing three and drawing four.

There have been dismal performances in defeat at Newcastle and Bournemouth, extreme highs and lows while drawing against Sheffield United and Aston Villa, and victories against Chelsea (in the Carabao Cup), Tottenham and Manchester City. United also became the only team to take points from runaway leaders Liverpool in a 1-1 draw at Old Trafford in October.

At times, United have missed Pogba’s game-changing qualities, his ability to create a chance with a visionary pass or his box-to-box energy.

What United certainly haven’t missed is Pogba’s habit of failing to track back, loss of possession in dangerous areas and infuriating inconsistency. Solskjaer must either decide if he should introduce him back into the starting XI quickly, or stick with what has worked so well in the wins against Spurs and City over the past week.

There is also the not insignificant matter of Pogba’s future and the ongoing interest from Real Madrid, speculation which the player has done little to dampen. That may influence Solskjaer because if he no longer wants to be at United, is there any value in trying to find a way to accommodate him in the team?

It is a big dilemma, because if Solskjaer makes the wrong call, he risks jeopardising the momentum and team ethic that his young team have worked so hard on in recent weeks.

Saturday’s win at City emphasised the potential, with Marcus Rashford, Daniel James and Anthony Martial, in tandem with Jesse Lingard, tearing the champions apart with their pace on the counter attack. Scott McTominay was outstanding at the heart of Solskjaer’s midfield, as was the much-maligned Brazilian, Fred.

Pogba arguably has more natural talent than any of those players. He is a player capable of improving virtually any team in the world. But it’s difficult to see how he fits in to Solskjaer’s tactics and formation.

He lacks the defensive discipline required to displace McTominay or Fred, so deploying him as a deep-lying midfielder. While his attacking talents have always been his strength, Pogba is not a player best-suited to a team which relies so heavily on fast counter-attacks. Replacing Lingard would seem the obvious step, but his contribution at City should not go unnoticed and he played his role with tenacity and industry that, too often, Pogba has failed to show.

He has become an enigma. A player blessed with undoubted talent, but one which can often diminish the overall quality of his team. Perhaps he has turned out to be the right player at the wrong time for the club, one who is incompatible with the requirements of this transitional side.

The coming weeks will tell us whether Solskjaer sees him as a player who can take United to the next level, but he can’t waste too much time trying to find the answer.