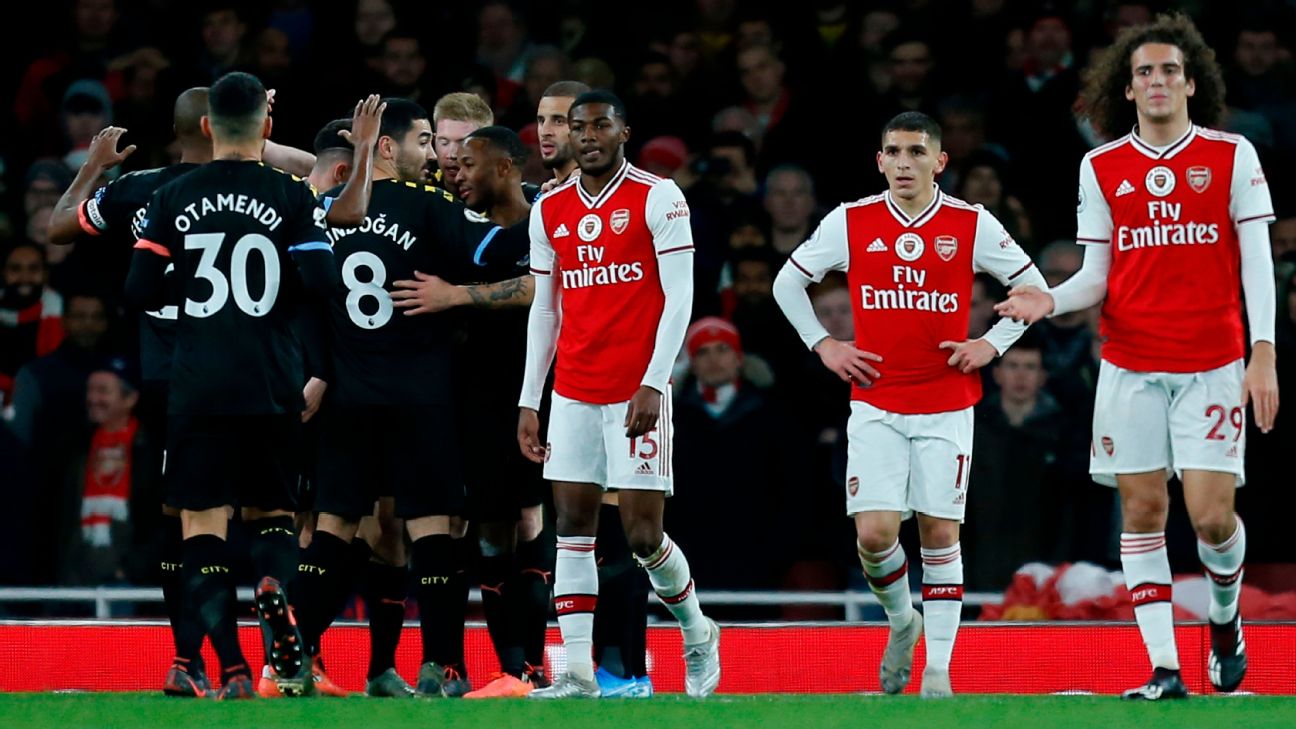 LONDON — As half-time approached at the Emirates Stadium, Manchester City fans tucked away in the corner began to sing one of their favourites: “We are not, we’re not really here.”

Given their team was already 3-0 down, Arsenal supporters inside the stadium probably wished they were elsewhere too, but the broader point is that, on the evidence of that opening 45 minutes, Pep Guardiola’s side are not where they should be.

City began the day 17 points behind Premier League leaders Liverpool, but such was their dominance from the opening whistle that you wondered how that was possible. Liverpool are a very good team, no doubt, and City were aided by Arsenal being, well, Arsenal, but the way they repeatedly carved open the home side suggested they should be closer to Jurgen Klopp’s team.

Talk of this team being finished is premature. Granted, there are changes to be made; City need a centre-back to replace Vincent Kompany, they are still not the same force without Fernandinho in midfield (he has spent most of the season in defence following Kompany’s departure) and Sergio Aguero, who was absent again through injury.

But when Kevin De Bruyne is playing like he did against Arsenal, Raheem Sterling is scoring again and Phil Foden is showing flashes of genius at just 19 years old, there does not appear to be much wrong with Guardiola’s side.

De Bruyne, playing further forward with the insurance of Rodri and Ilkay Gundogan behind, was sensational. He opened the scoring after 89 seconds, laid the second on a plate for Sterling 12 minutes later and then made it three with a fizzed drive from outside the box after 40.

Even after that — just at about the time the City fans reached in full voice — he curled a delicious effort toward goal from 20 yards that was only stopped from nestling in the top corner by Bernd Leno, who finger-tipped the shot onto the post with a contender for save of the season. Put simply, City will never be too far from winning things when De Bruyne is in such a mood.

“His shooting is a joke,” Foden said. “When you’ve got a guy like this playing, you know anything can happen with the amount of chances he creates and scores. It’s a pleasure to play with him.”

Guardiola agreed, although he insisted his team had been better in last weekend’s defeat to Manchester United than against Arsenal.

“Kevin is an extraordinary player,” the City manager said. “He sees passes and actions that normal human beings cannot see. We speak with him about scoring more goals and he scores two goals and makes one assist.”

For Arsenal, the only positive was that a day, which could have ended up a disaster, was only classed as bad. The result was 3-0 but City could — quite easily — have hit six. The Gunners, meanwhile, managed just one shot on target and have now lost five successive league games with City; their worst run against an opponent since being beaten five straight times by Manchester United between September 1983 and August 1985.

Freddie Ljungberg watched as Arsenal conceded the first goal for a sixth consecutive league game. Life in England’s top flight is hard enough without giving the other team a head start and the interim manager has recorded just one win from five games; any hope of a bounce following Unai Emery’s sacking has disappeared.

For a team in such dire form — Arsenal have won once in all competitions since late October — every game is laced with danger, but they face a particularly tricky run over Christmas and the New Year, with trips to resurgent Everton and Bournemouth followed by home games against Manchester United and Chelsea.

Arsenal have not won a league game at the Emirates for more than two months and the atmosphere inside the stadium on Sunday jumped from frustrated to poisonous and back again. There were times when it threatened to boil over, especially when the substituted Mesut Ozil’s slow exit was greeted with scattered boos. The German volleyed his gloves down the touchline in response.

“The last couple of years, we’ve struggled against Manchester City,” Ljungberg said. “Liverpool and Manchester City are in a league of their own. We had some small half chances and when City had theirs, De Bruyne smashed them into the net. I’m an Arsenal man and we try everything but the reality is there is a gulf in quality between City, Liverpool and the rest.”

It was also telling that Ljungberg used his post-match press conference to make a demand of Arsenal, regarding clarity about the long-term managerial situation.

“It would be good to make a decision, regardless of what it is,” he said.

With 10 minutes to go, City’s official Twitter account had posted “cruise control” and it was difficult to argue with the summary. Only one of the clubs on show at the Emirates looked to be in need to urgent change.