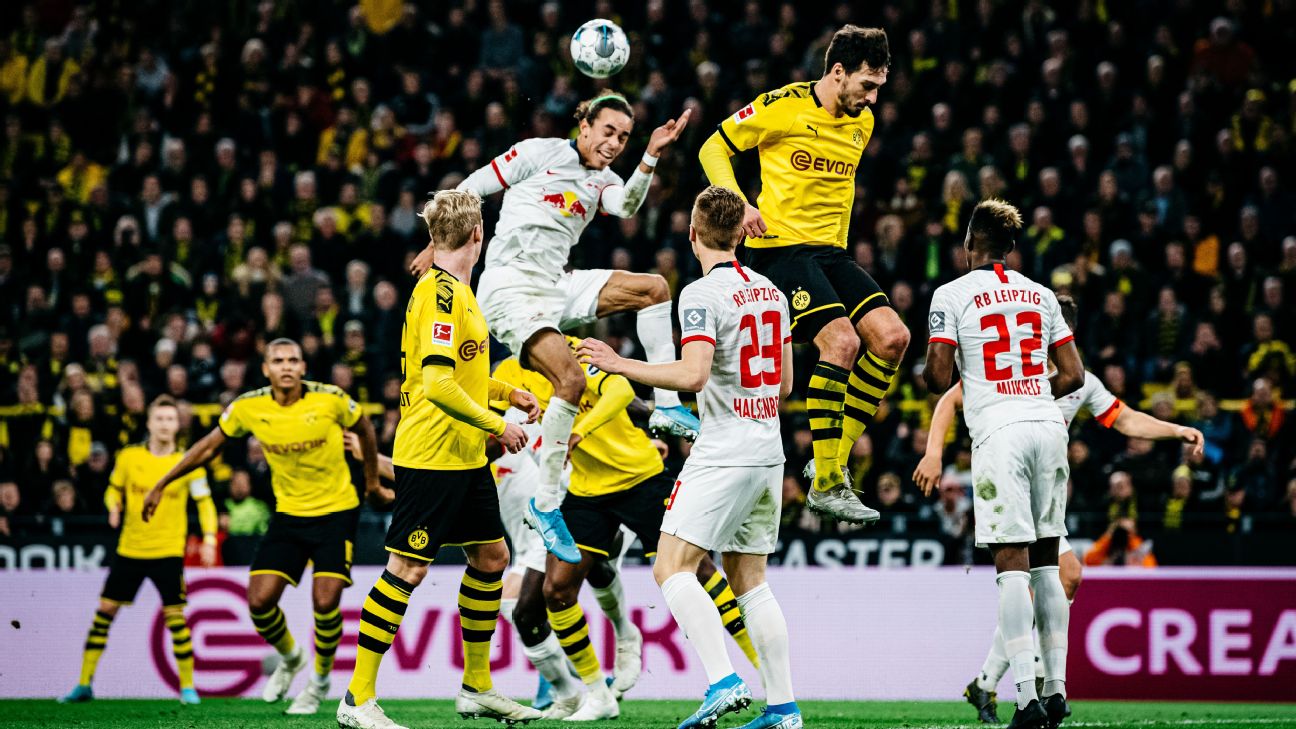 On a rainy December night, Borussia Dortmund and RB Leipzig played out a thrilling 3-3 draw at the Westfalenstadion amid a tug-of-war between the two sides for Norwegian wonderkid Erling Haaland.

In the end, the 25,000-strong Yellow Wall collectively shook their heads in disbelief at the result. Down on the pitch, the Dortmund players did the same. At the other end of Signal Iduna Park, the Leipzig supporters celebrated a vital point.

It’s a result that keeps the Red Bull-backed club on top of the league and in contention for their first ever Bundesliga title. Dortmund, meanwhile, remain four points behind the league leaders after matchday 16 and could fall behind Bayern Munich on Wednesday.

And while the on-field action was exhilarating and the narrative of the title race only heightened the drama, there’s yet more intrigue between these two clubs.

Somewhere in Europe, the 19-year-old Haaland presumably followed the match intently, as it first swung in Dortmund’s direction and then Leipzig’s. And there was plenty to like in what both sides displayed.

Only last week, he visited Leipzig, and then Dortmund. Both clubs want him. Dortmund have their reputation and their history to offer, while Leipzig have the promise of the future.

In the past handful of years, Dortmund have established themselves as the go-to club for up-and-coming talents in Europe. Christian Pulisic, Pierre-Emerick Aubameyang, Ousmane Dembele and Jadon Sancho all made crucial steps of their careers at the legendary Westfalenstadion — despite the club’s constant mood swings that have routinely hindered BVB since Jurgen Klopp’s exit in 2015.

Dortmund developed talent, but lost their sense of direction trying to keep up with Bayern Munich. Finishing second behind Germany’s only team with a worldwide reputation, Borussia found it difficult to maintain their focus and identity.

Leipzig, meanwhile, are the new kids on the block. They are not loved, and not accepted by the majority of German football fans, but they are part of Bundesliga. And in their 10th year of existence, they are competing for their first ever championship.

Leipzig are part of a bigger project. The Austrian energy drink giant Red Bull, very much like the City Football Group, have franchises across the globe – Salzburg, New York and Sao Paulo — but it is at Leipzig where the brand’s biggest stars play.

But while Leipzig is Red Bull’s top club, it’s at FC Salzburg where the talents are first fed into the machine. Some 15 players have already made the move from Austria to Germany and only a few, like Sadio Mane, got away.

The battle for Haaland, now, is one between Leipzig and Dortmund.

The Black and Yellow spent big in the summer. They signed Julian Brandt, Thorgan Hazard, Nico Schulz and Mats Hummels for an outlay of more than €100 million, but failed to add a full-fledged striker. They have since admitted their mistake, and hope to attract Haaland with their stadium, their energy and their reputation as one of Europe’s finest producers of talent. They can also offer minutes — ever important for youngsters.

Leipzig also want the Norwegian. Already packed with talent up front, Haaland still ticks every box: he’s young, in Red Bull’s system, knows the brand’s idea of football and will get playing time at the Red Bull Arena. He could make the next step at a place he already knows inside and out.

On Tuesday, Dortmund and Leipzig not only played for points, for places in the Bundesliga title chase, but one could argue that they played for the chance to impress Haaland against their closest rivals for his signature.

The visitors started the match with a four-point lead on Dortmund, who themselves had just bounced back from a crisis with three straight wins in the league. They wanted to make it four and they had a hungry Westfalenstadion behind them.

Sancho, Hazard and Brandt wreaked havoc on Leipzig’s defense, and at half-time, to a round of thunderous applause from the stands, led 2-0 after goals by Julian Weigl and Brandt, whose Lionel Messi-like close control saw him glide past two defenders before putting the ball away.

Dortmund keeper Roman Burki had made two incredible saves before half-time, as the rain began to fall heavily, and BVB’s social media channels boasted: “Burki makes saves and water is wet!” But Leipzig were gifted two goals immediately after the break.

Burki mistimed a run from his area, made a sloppy headed clearance closer to the halfway line than the goal line, and Timo Werner thanked him by picking up the wayward ball and coolly tucking it home from distance. Dortmund were shocked, which can be the only explanation for Brandt’s gift of a back pass that fell into Werner’s path, who then rounded Burki and levelled the score six minutes later.

BVB had all but invited Leipzig back in the match.

Werner later said he had played his worst match for Leipzig until Borussia gifted him those goals. Still, BVB replied just two minutes later, when Marco Reus found Sancho, who made it 3-2.

In a difficult second season in Germany’s upper tier, the England winger has now scored in seven consecutive matches. It is unlikely he will add to it in the final match of the year at Hoffenheim: He left the pitch with cramp.

It was left for Patrik Schick, often linked with Dortmund but now at Leipzig, to level the score once and for all. That was that. Three goals each.

“We won’t apologise for it, but yeah, it was a lucky point for us,” Leipzig coach Julian Nagelsmann said during his news conference. “Dortmund must kill this match before half-time, but they didn’t. We weren’t the better side.”

Down in the mixed zone, Dortmund sporting director Michael Zorc shrugged his shoulders: “Leipzig don’t know how they got this point here. That one hurt.”

One name you did not hear in Dortmund on the night was that of Haaland, but that may only be the case for so long. He must now choose sides.

Will he remain within the relative safety of the Red Bull system he knows so well? Does he want to experience the wildly passionate Westfalenstadion with Dortmund’s mood swings? Or will he sign for Manchester United after all?