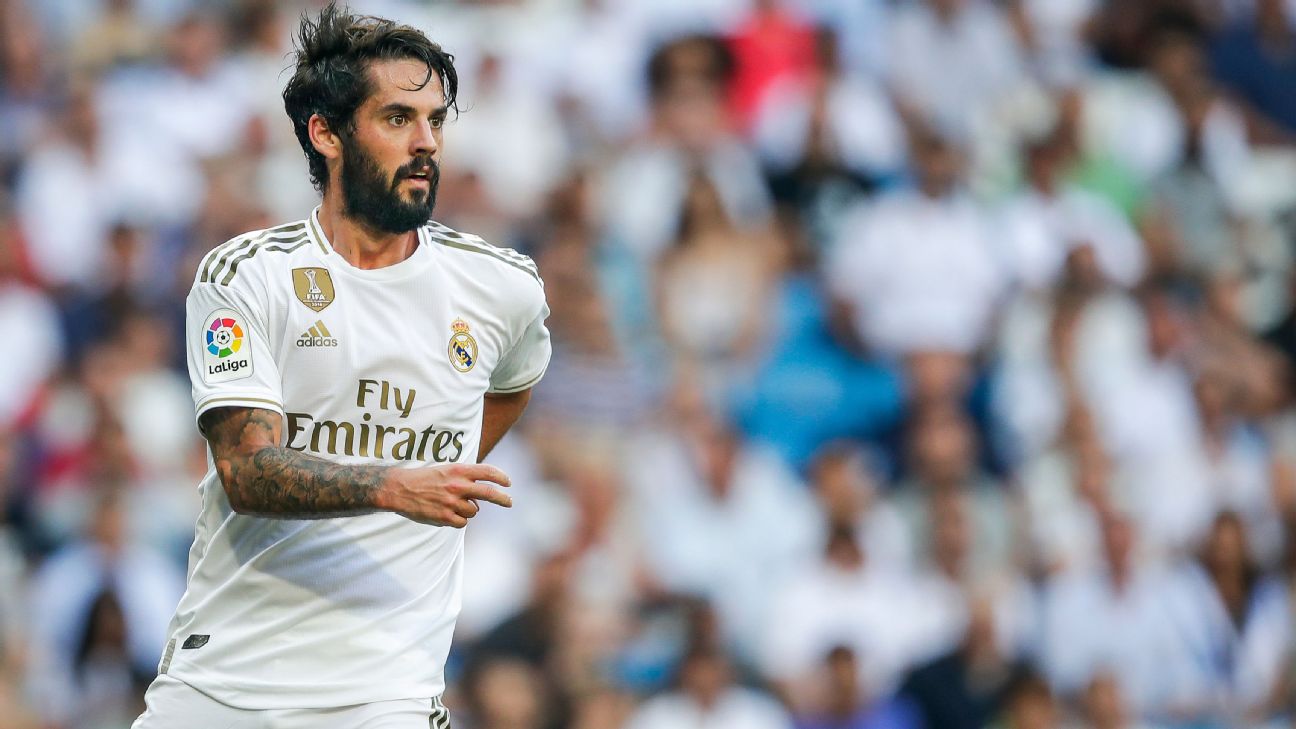 Real Madrid are looking to add Tottenham playmaker Christian Eriksen in January, but in order to do so, they’ll need to offload some of their high earners, according to the Mirror. One name Los Blancos are ready to move on from? Isco.

The report suggests that Madrid have offered the 27-year-old to Chelsea for £44 million, and the West London club reportedly are considering it.

Frank Lampard has insisted that he’s ready to add to his squad in January, and the Blues have been linked with the likes of Jadon Sancho, Timo Werner and Wilfried Zaha in recent weeks.

Uruguay front man Edinson Cavani is set to join Atletico Madrid, according to Marca. The Madrid-based outlet writes that the Spanish capital is his most likely destination following an imminent departure from Paris Saint-Germain.

Cavani is reportedly keen on a switch to Atletico, and although the French club would rather keep him until the summer, they’re unlikely to insist on him seeing out his contract given his long service to the Ligue 1 giants. The 32-year-old has slipped down the pecking order at PSG following the arrival of Mauro Icardi, and now Atletico are ready to offer him another platform to show that he can still mix it with the best in the world.

The offer on the table is reportedly two and a half years, with Marca claiming that a deal could be sealed in the next couple of days.

Gomes could be Barca target

Manchester United could be set to lose another of their young starlets, with Barcelona reportedly intent on bringing Angel Gomes to the Nou Camp, the Mail writes. The report states that the Catalan club are keeping more than a keen eye on Gomes as well as Tahith Chong, the club’s 2018 young player of the year.

Gomes has so far failed to agree a new contract with the club and could be free to move for nothing by the time the summer rolls around. The young midfield star is apparently unsettled at Old Trafford and set tongues wagging recently by deleting any mention of the club from his Instagram account. All of which has caught the attention of some of Europe’s top clubs, with Barca joining Juventus among a list of potential suitors.

Gomes became the youngest player at United since Duncan Edwards when he made his debut against Crystal Palace in May 2017. He was just 16 years and 263 days at the time, but has made just seven appearances for the club since. Little wonder he’s considering his next move.

– The chances of Manchester United being pipped by RB Leipzig to the signature of Erling Haaland are looking increasingly remote, with the club’s director of football admitting that the Bundesliga side are struggling to compete financially with the Premier League giants, according to Germany’s Sport1.

– Arsenal full-back Sead Kolasinac has caught the attention of Italian duo Napoli and Roma, according to Sky Sports, with the former keen to bring in the Bosnia and Herzegovina international to Naples in January, with the latter said to prefer to wait to add the 26-year-old in the summer.