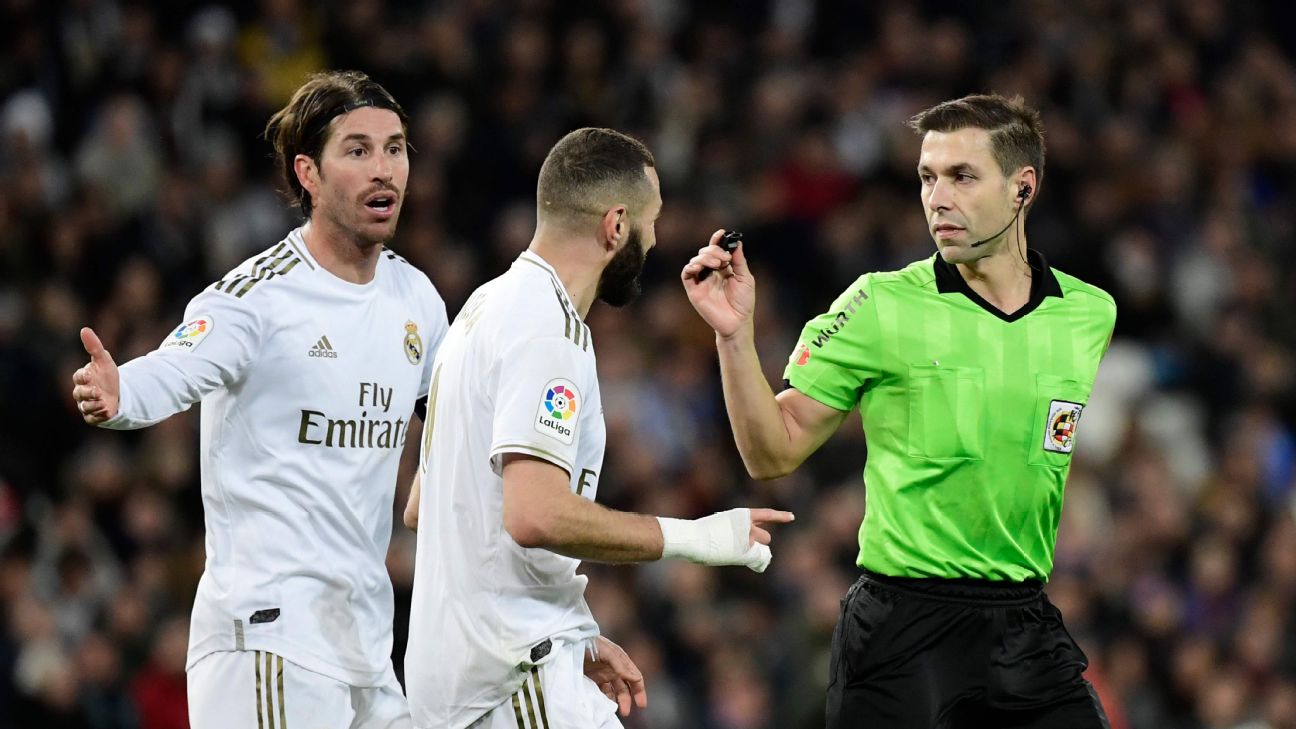 Real Madrid failed to score for the second game in a row in a goalless draw with Athletic Bilbao at the Bernabeu. The result sees Los Blancos end 2019 two points behind Barcelona at the top of La Liga.

Madrid were the better team in a first half that saw Toni Kroos hit the bar before Thibaut Courtois saved from Athletic forward Inaki Williams at the other end. Karim Benzema could have scored after rounding goalkeeper Unai Simon, only for his shot to be cleared off the line.

Substitute Nacho’s header rattled the bar seconds after coming on early in the second half, while Luka Jovic also hit the post late on as Madrid were frustrated in the final La Liga game of the year.

Real Madrid came into this game in buoyant mood after an impressive performance against Barca at Camp Nou in midweek and unbeaten in 12 games. This encounter, a classic of Spanish football in its own right, was no easy task against a physical Athletic side who looked quite happy to settle for a point. Madrid created chances, hitting the woodwork three times, but couldn’t take them.

There were some nervous moments at the back as the Madrid defence were troubled by Williams’ pace. Athletic would have taken the lead were it not for Courtois’ save, while the home side were relieved that the offside flag went up when Kenan Kodro had the ball in the net.

At the other end of the pitch, there is a troubling overreliance on Karim Benzema in attack. It sometimes feels like if he doesn’t score, the team won’t. This is not a situation a club of Real Madrid’s stature and financial muscle should be in.

6 — Zinedine Zidane made four changes from Wednesday’s draw at Camp Nou, resting Raphael Varane, Isco and Gareth Bale, while Casemiro missed out through suspension. The Brazilian midfielder has no direct replacement in the squad and Zidane had to ask Federico Valverde to play deeper than he would like. Zizou brought on Bale and Jovic as Madrid chased a goal, but there was no late flurry of chances.

GK Thibaut Courtois, 7 — Made one outstanding early save from Williams, getting down low at his near post, and an even better stop from Athletic sub Asier Villalibre deep in added time. Looks increasingly at home in a Real Madrid shirt.

DF Dani Carvajal, 7 — There’s a refreshingly old-fashioned air to Carvajal sometimes. He is a full-back who genuinely seems to like defending. One crucial second-half intervention denied Williams at the far post.

DF Eder Militao, 7 — Militao has one key attribute in common with Varane: serious pace. Here he was up against Williams, one of the fastest players in La Liga, but an injury meant he was forced off early.

DF Ferland Mendy, 7 — Once again solid when deputising for Marcelo. Mendy has been one of the season’s quieter success stories.

MF Federico Valverde, 6 — Took up a deeper, more defensive position in the absence of Casemiro, and there’s no doubt his game loses something as a result. Wasn’t able to get forward as he usually does, but kept things simple otherwise.

MF Toni Kroos, 8 — Provided one of the moments of the first half when he burst through the Athletic defence to hit the bar. Kroos has been in imperious form for a couple of months now.

MF Luka Modric, 7 — No longer a certain starter in big games, having been on the bench for El Clasico. Modric never disappoints but this wasn’t one of his best nights.

FW Vinicius Junior, 7 — Bright in the first half, causing Athletic problems. He looks to be slowly regaining confidence but still lacks the final ball and is often guilty of trying an extra trick when an early pass would suffice.

FW Rodrygo, 6 — Found Benzema twice with clever balls into the box from the right in the first half, but otherwise a subdued showing. Taken off after an hour.

FW Karim Benzema, 7 — Unfortunate not to score in the first half, and unable to add to his 12 league goals this season. He could really do with some of his teammates stepping up to share some of the goal scoring burden.

DF Nacho, 7 — Replaced the injured Militao and immediately went close, hitting the bar with a header.

FW Gareth Bale, 6 — Came on for Rodrygo and added presence in attack without truly threatening.

FW Luka Jovic, N.R — Thrown on as Madrid chased a goal, he hit the post with a header on 85 minutes.