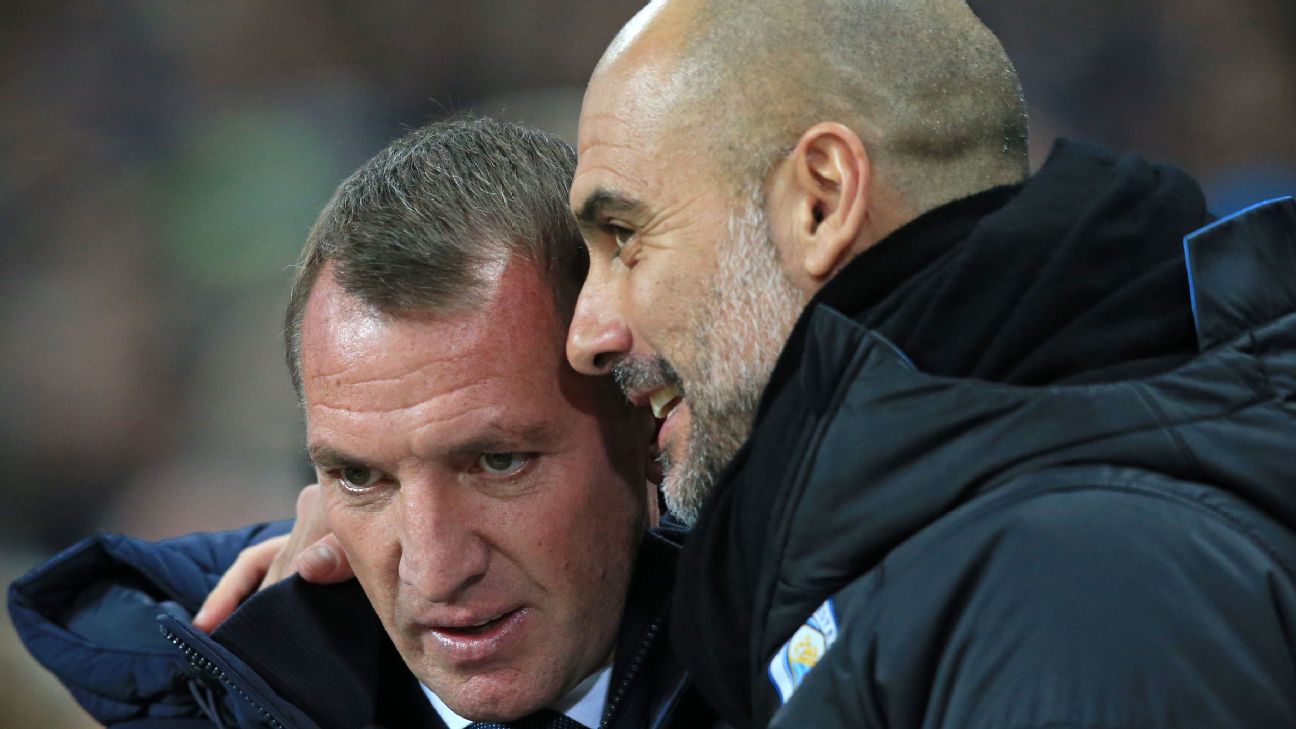 MANCHESTER — Pep Guardiola has never lost back-to-back top flight home fixtures as a manager, and apart from eight minutes on Saturday, he never looked like doing so. Manchester City came from behind to beat Leicester City 3-1 at the Etihad Stadium to ensure that their defeat to Manchester United was followed up with a win instead of an unwanted first for the enigmatic manager.

Saturday’s game was also the first test of a new era for City. For the first time since his move to Manchester in 2016, Guardiola did not have Mikel Arteta on the bench alongside him. The Spaniard was unveiled as Arsenal’s new manager on Friday and as such, the pair won’t meet again until Mar. 1 at the Etihad. Sources have told ESPN that despite his move to the Emirates, Arteta will still be considered as a candidate for the City job if and when Guardiola leaves. Yet that could be as early as the summer of 2021 — when Guardiola’s contract runs out — and asked about the prospect at a news conference on Friday, Guardiola played it down, insisting he believed his former assistant was in London for the “long term.”

Arteta’s decision could, in the end, prove useful for Brendan Rodgers, the manager Guardiola bested here. City’s hierarchy love a smooth succession plan, and Rodgers has been on their radar since his spell at Swansea City. Since then he’s been appointed by Liverpool, come within a Steven Gerrard slip of winning a surprise title, been sacked and rebuilt his career at Celtic. He’s done so well in just 10 months at Leicester that he arrived at the Etihad on Saturday as a viable candidate to be the next manager for the team he was trying to beat.

Rodgers is so ambitious that he’d surely be tempted if asked, and watching his team chase Man City’s shadows will only have underlined the attraction of the job. He came with a clear tactical plan and when Harvey Barnes played a delicious pass with the outside of his boot to send Jamie Vardy scampering away and give Leicester the lead in the 22nd minute, it looked to be working. But City are champions for a reason, and when they needed their big players to turn up, they did.

Just eight minutes later, Riyad Mahrez — plucked from Leicester in 2018 — cut inside and equalised via a deflection off Caglar Soyuncu. Mahrez, playing on the right, was excellent all day and Leicester left-back Ben Chilwell will not have many more harrowing days in the league. When City took the lead just before half-time it was Mahrez again in the thick of it. He fizzed a pass across the pitch into Raheem Sterling, who was too clever for Ricardo Pereira and sent tumbling in the box. Ilkay Gundogan converted the penalty.

The game had ceased to be a contest by the time Gabriel Jesus added a third 20 minutes from time, converting after Kevin De Bruyne‘s sharp run and cross to the back post, but Rodgers did himself no harm. It was evident that Guardiola had the better players, and two in particular, Mahrez and De Bruyne, won the game. City were so good that Guardiola rated the performance among their best of the season, Rodgers labelling the defending champions “outstanding.”

It says everything about the relative strength of the two squads that not so long ago, Mahrez was Leicester’s best player and now he’s not guaranteed to start every week for Man City. It’s equally easy to see why a manager like Rodgers might be a little jealous of Guardiola’s resources.

“They’ve got top players who can manage the game,” said Rodgers afterwards. “They’re an exceptional team.”

Rodgers has plenty of good players in his squad — Vardy and James Maddison chief among them — but he does not have a De Bruyne or a Mahrez who can swing games in his side’s favour when needed. It should be remembered that he is doing all this with Leicester having lost an £85 million centre-back in the summer. (De Bruyne was that impressive Guardiola was asked in his postmatch news conference whether the Belgian is the best player in the Premier League.)

Man City were worthy winners on the night but Rodgers was quick to point out his team are still one point clear in second place and into the semifinals of the Carabao Cup. It’s testament to the job he has done at the King Power Stadium and heading into the halfway stage of the season, they are still a viable challenger for the title. With Liverpool up next on Boxing Day, inflicting a first defeat of the season on Jurgen Klopp’s side would be another feather in his cap.

“City have a level of player who can really turn it on, and it’s always going to be difficult for us to bridge that,” said Rodgers. “I’ve been a big admirer of Pep for many years The work he’s done here is incredible, and I’ve always been a follower of his.”

He could yet be the man to follow Guardiola into the City hot seat.