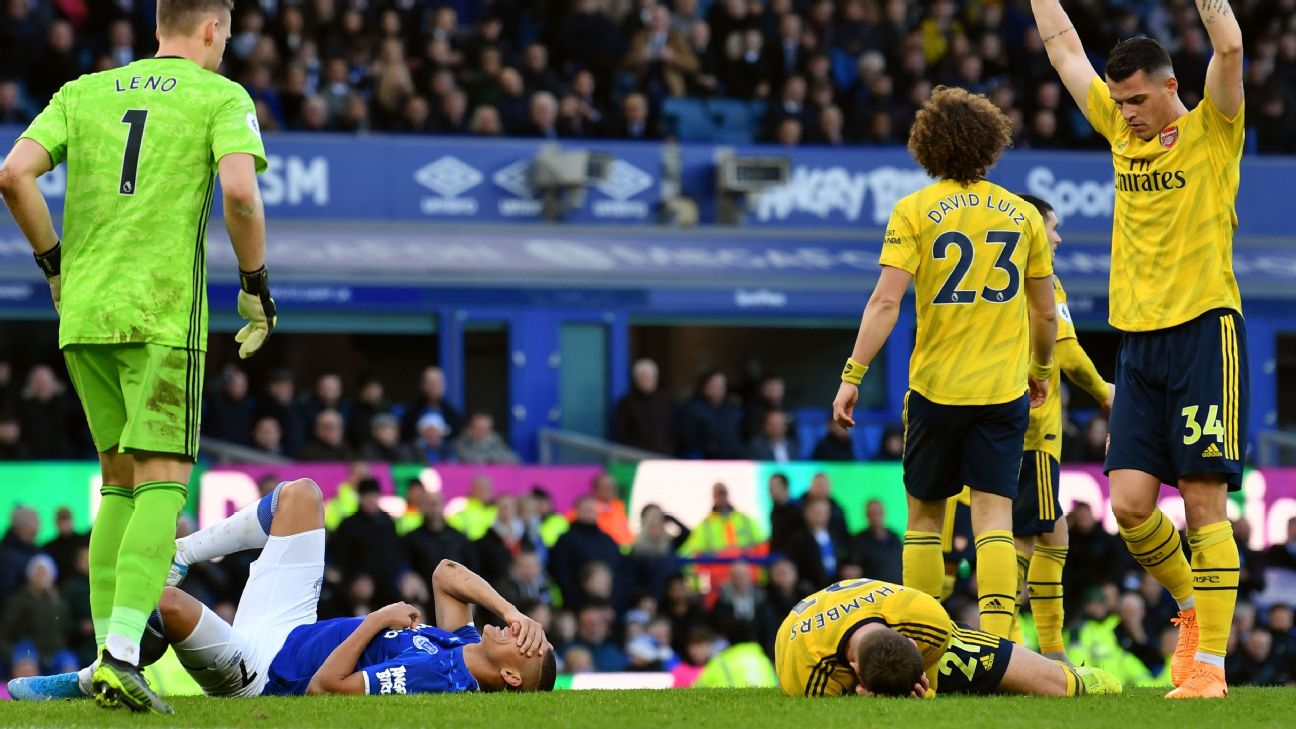 Another wild weekend in the Premier League is done and dusted. We get you caught up on the action with the Weekend Review.

JUMP TO: Ancelotti and Arteta see the task they have | Ferguson leaving a mess for Ancelotti | Why we can’t be apathetic in the face of racism | United continue to be the Prem’s weirdest team | KDB could make anyone look foolish | McGinn’s injury could sink Villa | Ings getting better and better | Norwich miss their big chance | McGoldrick isn’t a failure | Almiron finally registers | Luckiest moment of the weekend

Ancelotti and Arteta see the task they have

After the UK election in 2010, the outgoing Labour chief secretary to the treasury Liam Byrne left a note for his Conservative successor. It simply read “I’m afraid there is no money.” It was supposed to be a light-hearted joke, but actually betrayed the reality of things, and it sprang to mind when watching Everton vs. Arsenal on Saturday, a game which felt like a 90-minute version of Bryne’s note.

The 0-0 bore draw was a game of such sweeping, wide-ranging incompetence that the new managers Carlo Ancelotti and Mikel Arteta might have been forgiven for a quick call to their respective agents, just to double-check all the paperwork was final and they definitely couldn’t back out of this.

Hopefully both men knew the scale of the jobs they were taking on before this game, but if not then it was nice of the two teams to spell it out for them.

A quick word on Duncan Ferguson substituting a substitute for the second game in a row. Perhaps this is one of those football conventions that people get upset about for no real reason, and in this case Cenk Tosun had 69 minutes to make a case to remain for the duration, so it wasn’t quite as egregious as the removal of Moise Kean at Manchester United last week.

But while that might all be logically true, Ferguson should also have considered any damage to morale that his decisions may have made, damage that won’t be his responsibility as of Monday. It might be slightly different if Ferguson knew he would be a longer-term manager for Everton, but he has potentially left a festering problem for Ancelotti, and for what? To make a point? What point exactly?

Everton are pretty thin in terms of striking options anyway, and on his way out of the dugout Ferguson has just publicly humiliated two of them. All the best, Carlo.

Whenever a racist incident occurs at a football game, the line constantly trotted out is that this is society’s problem, not just football’s. But that always feels like a tacit or indeed explicit abdication of responsibility, to turn the attention away from football and just think that someone else can deal with it so we don’t have to.

Of course it’s society’s problem, and the fact that racists feel emboldened to express their prejudice at football games, as one or more allegedly did towards Antonio Rudiger at Tottenham, is in large part due to the wider climate.

But football is such a significant part of society that it not only reflects the ills of the world, but it can be a significant force in combating them too. Inevitably, all the usual suggested methods to stamp out racism in football feel impotent, futile, pointless even. But they’re better than nothing: Report incidents, throw people out, arrest them, ban them, stop games, issue fines, dock points, play games behind closed doors.

Maybe none of it will work, but it’s better than nothing. The most dangerous thing we can all do, as a collective in this game, is be frustrated into a position of apathy.

Man Utd continue to be the Premier League’s weirdest team

Good lord, Manchester United are a weird team. There they sit, eighth in the table, having not lost a game to any of the teams above them, but having been defeated five of the 11 times they’ve played teams below them. They have only won one game when they had the majority of the ball, which was against Norwich.

“Not necessarily,” was Nigel Pearson’s telling response when asked if he expected more from United after he guided bottom side Watford to a 2-0 win. Of course not — why would you?

They could easily put the defeat to Watford down to individual errors, by David De Gea and Aaron Wan-Bissaka, but that would be to ignore the very clear pattern: Despite Ole Gunnar Solskjaer constantly harking back to their glorious past, United have become an outfit with a small-team mentality, able to perform against the big boys but not rouse themselves for the more prosaic tests, like lower-league mid-table teams getting up for the occasional cup tie.

Why that is? Who knows. But until they fix the problem, they will never challenge for the top four, let alone the title.

Caglar Soyuncu has been rightly regarded as one of Leicester’s many success stories this season, a defender purchased a year ago and sensibly eased into the side, now excelling under Brendan Rodgers. He was made to look a buffoon on Saturday on a number of occasions, but it’s entirely understandable because most people would be made to look a buffoon by Kevin De Bruyne at the moment.

De Bruyne continues to be a sensation, registering his 10th assist of the season against Leicester by presenting Gabriel Jesus with a chance he couldn’t possibly miss.

It sometimes feels like De Bruyne is almost spoon-feeding his teammates, putting them into positions where they can’t not score: It’s certainly not De Bruyne’s fault that their win over second-placed Leicester merely took them to within 11 points of leaders Liverpool, who are now 10 clear at the top of the table with a game in hand, which is against West Ham. Even when Liverpool don’t play at the moment, they win.

If we’re taking nominations for the most important players in the Premier League, measured by how their teams cope without them, then John McGinn must be up there with the best of them. Granted, Aston Villa haven’t exactly been world-beaters with him in the side, but observe the way they fell apart against Southampton on Saturday without him, after McGinn was forced off with what turned out to be a fractured ankle.

That’s the sort of injury that, while perhaps not entirely ruling a player out for a very long time, is likely to mean getting back up to speed and his previous levels will be a struggle. This could be a season-defining injury for Villa.

Ings getting better and better

Speaking of badly-timed injuries, there surely cannot have been one more more cruel than the one Danny Ings suffered back in 2015, when he damaged his cruciate ligaments in his first training session under Jurgen Klopp at Liverpool, having started his Anfield career brightly. He suffered another serious knee injury a year later, meaning that by the time he regained anything like full fitness Liverpool had moved on without him.

The mental strength required to come back from that is pretty remarkable, never mind the physical effort, but after a solid season on loan at Southampton last term, this season he is back to showing the potential that he did when playing for Burnley six or so years ago. His strikes against Villa were his 10th and 11th of the season, meaning only Jamie Vardy has scored more than him so far.

International recognition isn’t the ultimate affirmation of a player’s quality that it once was, but it would feel like a fitting reward for him to receive his second England cap at some point in 2020, five years after his first. He deserves it.

They’re six points from safety which with half the season remaining is not exactly an insurmountable gap, but it feels like Saturday’s 2-1 defeat to Wolves could turn out to be the moment Norwich look back upon as a tipping point in their season.

“The game should be buried at half-time,” said Daniel Farke after the game. “Nobody could have complained if we were 4-0 up.”

He wasn’t really exaggerating either: Norwich spurned a plethora of chances, including two missed one-on-ones by Teemu Pukki, in theory their most reliable goalscorer.

This was the chance, and not taking it was made all the more painful by Watford’s win over Manchester United on Sunday.

McGoldrick isn’t a failure despite his lack of goals

The job of a striker is to score goals, so by definition a striker should theoretically be considered a failure if they are not scoring goals. But David McGoldrick, who hasn’t found the net at all this season, is still a crucial part of the Sheffield United team that remain in a remarkable fifth place.

He’s in the phase of looking like he’s trying too hard to score now, but despite his lack of goals he’s still contributing plenty to the Blades, the standout moment this weekend being an astonishing pass to John Lundstram in the first-half against Brighton. The goal will come, but if it doesn’t, then McGoldrick shouldn’t be thought of as a failure.

And when that goal does eventually come, presumably his reaction will be similar to Miguel Almiron‘s, after he finally registered for Newcastle, nearly a year after his arrival at St James’s Park.

“I was delighted for him,” said Steve Bruce after the game. “He said in his broken English ‘Thank f— for that’ or something like that.”

Like McGoldrick, Almiron’s contributions have been valuable without him scoring, but nobody is going to turn down a few more goals.

Luckiest moment of the weekend

This week the nod of fortune goes to referee Anthony Taylor, who enjoyed the fortune of officiating in a league with VAR.

In initially giving Tottenham the free kick, after Paulo Gazzaniga had battered into Marcos Alonso, Taylor made one of the season’s most baffling refereeing decisions, and he was fortunate that the technology ensured it ultimately didn’t cost anyone anything.