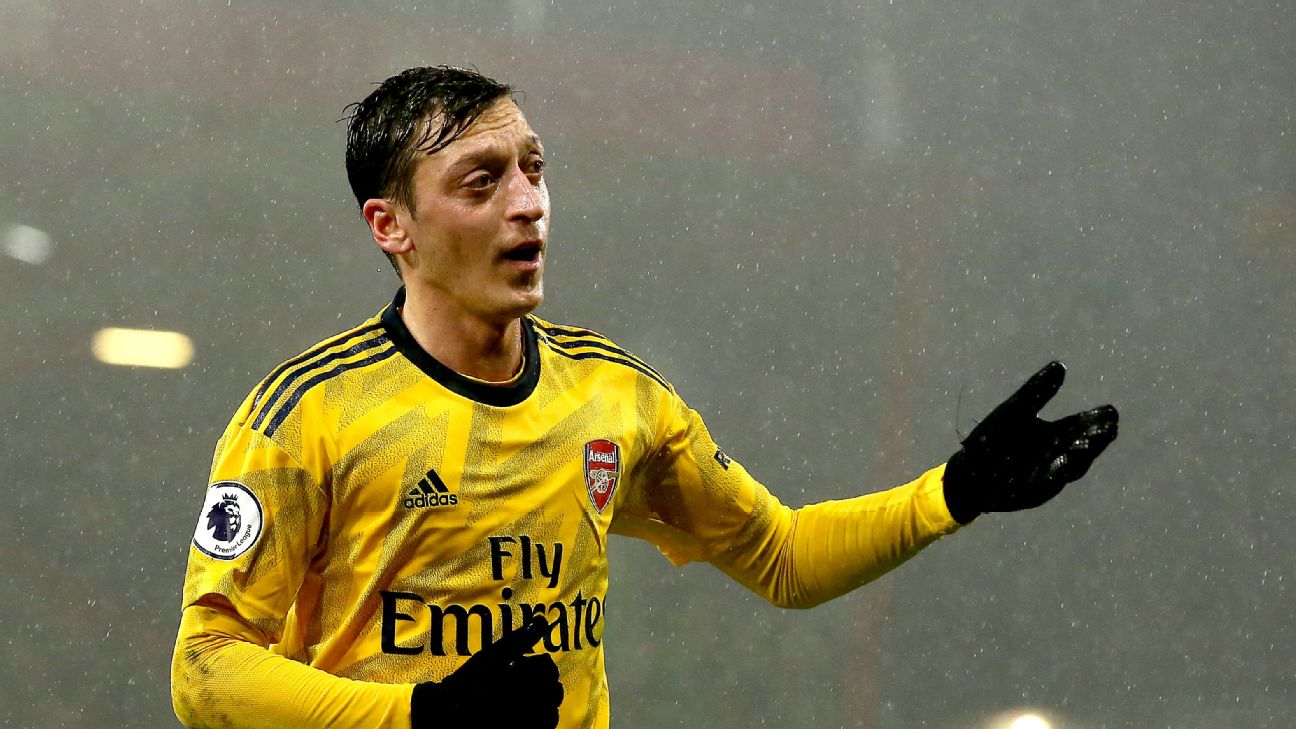 Mikel Arteta’s first game in charge of Arsenal was an entertaining one, but they were unable to claim all three points in a 1-1 draw at Bournemouth.

Dan Gosling opened the scoring for a second time in less than a fortnight, slotting home from just outside the six-yard box after 35 minutes. Pierre-Emerick Aubameyang was Arsenal’s saviour, though, tucking away a loose ball after Reiss Nelson‘s shot was blocked shortly after the hour mark.

It was the Mesut Ozil Show for large portions of the first half, and if Arteta can coax consistent performances out of the mercurial German then he will go a long way towards vastly improving this Arsenal side.

The Gunners worked themselves into plenty of promising positions out wide, but the final ball was nothing short of abysmal, and with the likes of Aubameyang and Alexandre Lacazette on the prowl in the penalty area, the quality of balls played into the box needs to improve.

6 — Arteta restored Ozil and Lacazette to the Arsenal starting lineup for his managerial bow, and there were glimpses of promise from a Gunners side that looked to move the ball quickly and create overloads out wide.

GK Bernd Leno, 6 — Unable to do anything about Gosling’s opener from close range, but had a relatively quiet afternoon generally.

DF Bukayo Saka, 6 — It may not be his first-choice position, but the 18-year-old looks more than comfortable at left-back. The youngster was always available on the overlap, and was the most reliable Gunner when it came to a final ball, although that wasn’t saying much.

DF David Luiz, 6 — A lack of Bournemouth pressing made it easy for the former Chelsea man to keep things ticking over, and he nearly bagged an assist with a brilliant through ball for Lacazette, only for the Frenchman to fluff his lines.

DF Sokratis Papastathopoulos, 6 — Against an out-of-form Callum Wilson, the Greek defender was never seriously troubled. Hobbled off with an injury in the final quarter of an hour and was replaced by Shkodran Mustafi.

DF Ainsley Maitland-Niles, 6 — Had an occasionally tricky time when dealing with Bournemouth forward Josh King, with the striker taking advantage with some foraging runs when the Arsenal right back was caught upfield. Booked for bringing down the aforementioned Norwegian in the second half.

MF Grant Xhaka, 6 — The midfielder was confident in possession, but defended poorly on Bournemouth’s opener, standing off Callum Wilson as the striker strode towards goal and provided a key pass for Gosling’s tap-in.

MF Lucas Torreira, 5 — A spritely opening 35 minutes from the Uruguayan, but he was unable to keep track of Gosling for the Cherries’ opener. Booked for a late challenge early in the second half.

MF Pierre Emerick Aubameyang, 7 — Switched out to the left-hand side to make way for Lacazette, but still managed to find himself in the right place at the right time to slot home the equalizer. Booked for celebrating with the travelling Arsenal fans after scoring.

MF Mesut Ozil, 7 — By far and away the best player on the pitch in the first half. The German looked keen to impress his new manager, and was pulling the strings in what was an excellent opening 45 minutes. Started to tire in the second period and was replaced by Joe Willock after 75 minutes.

MF Reiss Nelson, 5 — The winger had more than his fair share of opportunities to provide a telling shot or final ball but the 20-year-old was largely wasteful. His moment of good fortune came when his deflected shot fell into the path of Aubameyang to slot home the leveler. Replaced by Nicolas Pepe for the final eight minutes.

FW Alexandre Lacazette, 5 — Restored to the lineup for the first time in three weeks, the Frenchman looked rusty when he was presented with chances to strike. Denied a goal after 69 minutes by an excellent last-ditch challenge by Bournemouth’s Steve Cook. Booked for clattering into Harry Wilson in the final minute.

DF Shkodran Mustafi, N/R — Slotted into the heart of defence for the final 15 minutes without any troubling incidents.

FW Nicolas Pepe, N/R — Unable to find the winner in his short cameo.