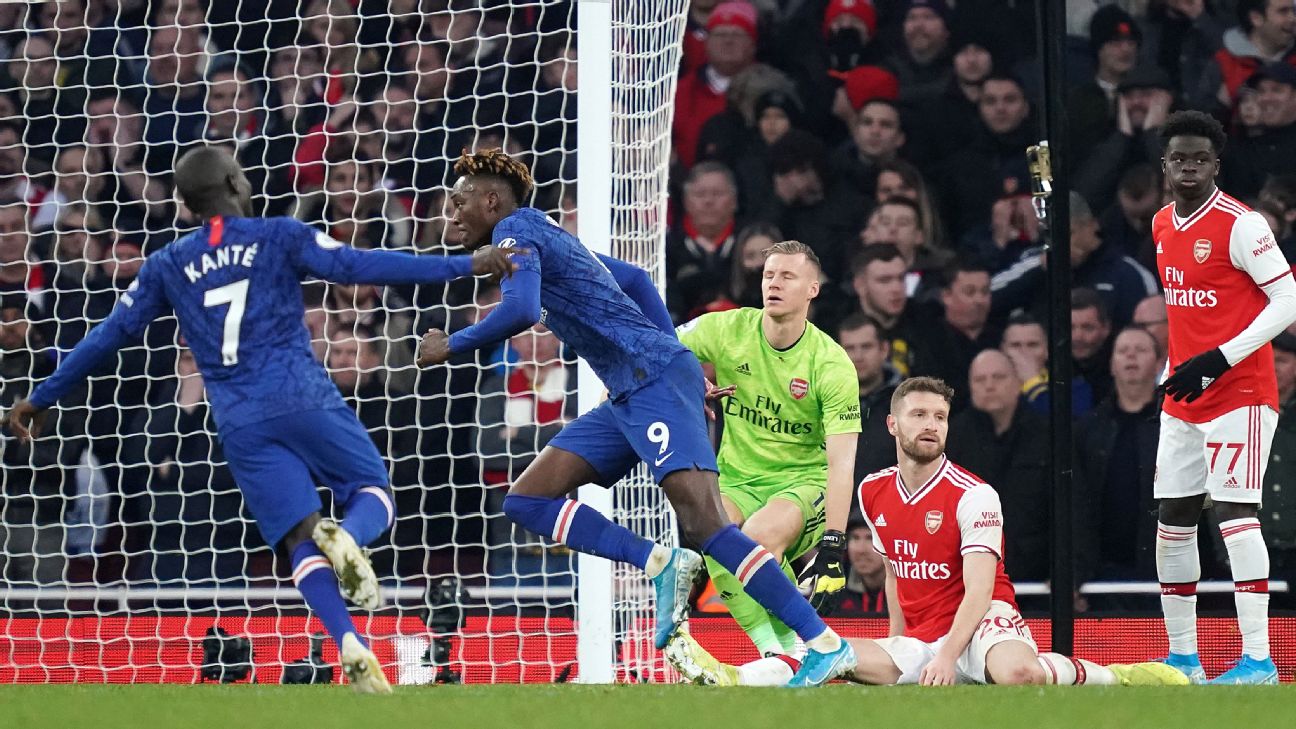 Chelsea produced one of the Premier League comebacks of the season as they beat London rivals Arsenal 2-1 at the Emirates.

Pierre-Emerick Aubameyang headed the Gunners into an early lead and Arsenal seemed as if they were in full control for large periods of the game. In the final 10 minutes, however, the Blues sprung to life as Jorginho tapped in the equaliser following a Bernd Leno mistake and Tammy Abraham scored to complete the turnaround with just minutes remaining.

When Chelsea looked switched on they were able to implement their possession game and slowly but surely make progress further up the pitch. They made things a bit dirty and while that shouldn’t exactly be approved as a positive way of making an impact, it helped them to kill any momentum Arsenal got from their opener. Once they got a sniff at goal, they were off to the races.

The Blues didn’t deal with Arsenal’s pressure in the first half and looked really wooden. While the lethargic feel to their game disappeared as the minutes ticked by, there was no real creativity to be seen. It was much more desperate than we’ve seen from Lampard’s side this season, and the yellow cards certainly didn’t help matters.

Manager Ratings (out of 10)

7 — The formation and manner in which Frank Lampard set up his team certainly felt like a risk, and while they grew into the game, it definitely came across as an error of judgement. His decision to make an early change showcased his ability to adapt, and you need that in a top-flight manager. As the comeback began, it was clear to see that the former midfielder has instilled a “never say die” attitude within this squad.

GK Kepa Arrizabalaga, 6 – His decision-making was called into question for the opening goal of the game, and he never really seemed to be comfortable from that point on.

DF Antonio Rudiger, 6 — Really struggled both on and off the ball to handle Arsenal when they came forward. Picked up a needless yellow card, but made a crucial clearance ahead of Chelsea’s second goal.

DF Kurt Zouma, 5 — Needs to cut out his poor diagonal passes which were one of many issues with his sloppy performance here.

DF Fikayo Tomori, 5 — Simply cannot handle 1v1 situations and panics under any form of stress or pressure. Could easily be dropped after this showing.

DF Cesar Azpilicueta, 5 — Fails to inspire any sense of urgency when moving forward and takes the selfish option nine times out of 10.

DF Emerson, 4 — Was static to his man for the opener, looked off the pace, and was subsequently substituted off before half-time.

MF N’Golo Kante, 6 — Grew into the game as it went on but really has fallen down a peg or two in the last few weeks in terms of his vision and passing.

MF Mateo Kovacic, 5 — Was first to the ball on occasion but was a step below his usual level. Substituted off in the 69th minute.

MF Willian, 7 — Fresh out of ideas and on the rare occasion he broke through the back four, he couldn’t produce the final pass or a strong shot at goal. Again, though, one moment of magic made the difference as he helped to set up the winner.

MF Mason Mount, 6 — Curled in a delightful free kick that led to Leno’s error for the equaliser, but aside from that put in another sub-par showing.

FW Tammy Abraham, 7 — Didn’t get the sort of service he needs to make things happen right up until the final few minutes when he turned well to slot home the winner.

DF Tariq Lamptey, 7 — Incredibly solid at the back despite being thrown in at the deep end and was a steady hand to have in the final few minutes. Consistently got down the right and you’d of never guessed this was the 19-year-old’s senior debut.

MF Callum Hudson-Odoi, 6 — Found his feet with quick movement on and off the ball after being brought on in the 69th minute.

MF Jorginho, 7 — Snuck into a great position and poked home the equaliser after a lively showing off the bench.