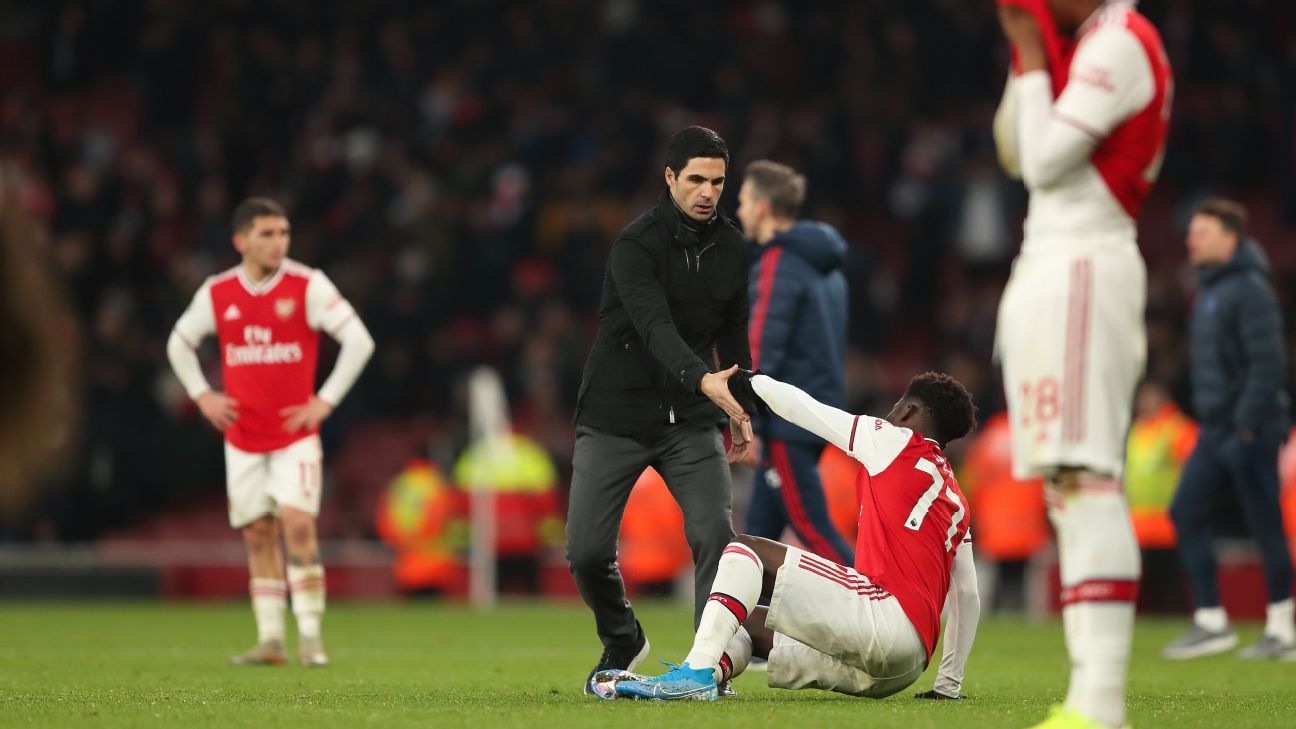 LONDON — Arsenal‘s final game of the decade ended like so many of the games that had preceded it: deflation, rows of empty seats and a nagging feeling of déjà vu. The sense of disappointment that greeted the final whistle in their 2-1 home defeat by Chelsea was only exacerbated by the knowledge that what had come before had, briefly, felt like a fresh start.

Taking charge of his first home game as Arsenal manager, Mikel Arteta had spoken before the match of the need to re-establish a “connection” with the club’s supporters and in the first half at least, he got what he had asked for. Arsenal took a 13th-minute lead, Pierre-Emerick Aubameyang stealing in behind Reece James to head home after Calum Chambers flicked on Mesut Ozil’s corner, and the home side defended their lead with tigerish appetite.

With Arteta pacing the touchline, Arsenal’s players massed themselves behind the ball and swarmed every blue shirt that tried to retain possession. Each challenge and every selfless defensive intervention by wide players Aubameyang and Reiss Nelson, drew an approving roar from the Emirates Stadium faithful. But although it took Chelsea until the 83rd minute to draw level, the balance of power in this London derby had shifted well before that.

Frank Lampard, Arteta’s opposite number, took decisive action before half-time, jettisoning his side’s 3-4-2-1 system mid-match for the second game running by sending on Jorginho for left wing-back Emerson and reverting to Chelsea’s default 4-3-3 formation. Swiftly positioned in his customary role at the base of midfield, Jorginho helped Chelsea to wrestle control of the game. Having been very fortunate to avoid a second booking for blatantly hauling back Matteo Guendouzi, there was a certain sense of inevitability that he should find himself with the simple task of tapping the ball into an empty net after Bernd Leno foolishly flapped at Mason Mount’s free-kick from wide on Chelsea’s left with seven minutes of the game remaining.

Individual errors have been one of the recurring themes of Arsenal’s decade and it came as little surprise four minutes later when Shkodran Mustafi (who had replaced the injured Chambers) inexplicably stood off Tammy Abraham and allowed the England striker to gather Willian’s cut-back, set himself and squeeze the shot between Leno’s legs that would settle the game.

Arsenal end the decade having lost four consecutive home games for the first time in 60 years and having conceded at least two goals in five successive home games for the first time since 1965. They’ve won only one of their last 12 Premier League games and enter the new year 11 points below fourth-place Chelsea in 12th position. With a home game against Manchester United just around the corner on New Year’s Day, Arteta already finds himself in the midst of a slump of historic proportions. Nevertheless, he will have detected grounds for optimism in the first half, with Ozil’s performance on a brisk, sunny winter’s afternoon typifying both Arsenal’s early creativity and their early endeavour.

The Arsenal No. 10 was a blur of delicately weighted lay-offs, slick touches and delightful dummies, and his efforts out of possession also earned him the noisy approval of the home crowd. When Ozil made way for Joe Willock in the 76th minute, it was to a standing ovation. On his last home appearance, in Arsenal’s 3-0 defeat at Manchester City’s hands earlier this month, he had been booed off.

Lucas Torreira also appeared transformed. The Uruguayan international turned in another composed display in front of Arsenal’s defence, tidily breaking up Chelsea’s attacks and quickly moving the ball on, while David Luiz momentarily threatened to become the symbol of the hosts’ second-half resistance, thundering into challenges and producing one brilliantly timed block to thwart Abraham.

Arsenal have not beaten one of their fellow “Big Six” teams in the league since a 2-0 win over Manchester United in March and with the final whistle nearing, the home fans started to enjoy themselves, cheerily informing Willian that he was a less good version of Nelson — albeit in slightly more colourful language that that — and goading 19-year-old Tariq Lamptey with cries of “Who?” when he came on to make what turned out to be an assured Chelsea debut. In the end, it would be the crowing voices of Chelsea’s supporters that filled the air as the stadium emptied in stoppage time, but Arteta said that he would take encouragement from what he had seen and put his side’s late capitulation down to fatigue rather than anything more insidious.

“More than something related to the organisation, it was physically tough to maintain the level that Chelsea’s players are at. We are asking them to do something different, to play a different pace and to be much more aggressive, and they suffered.”