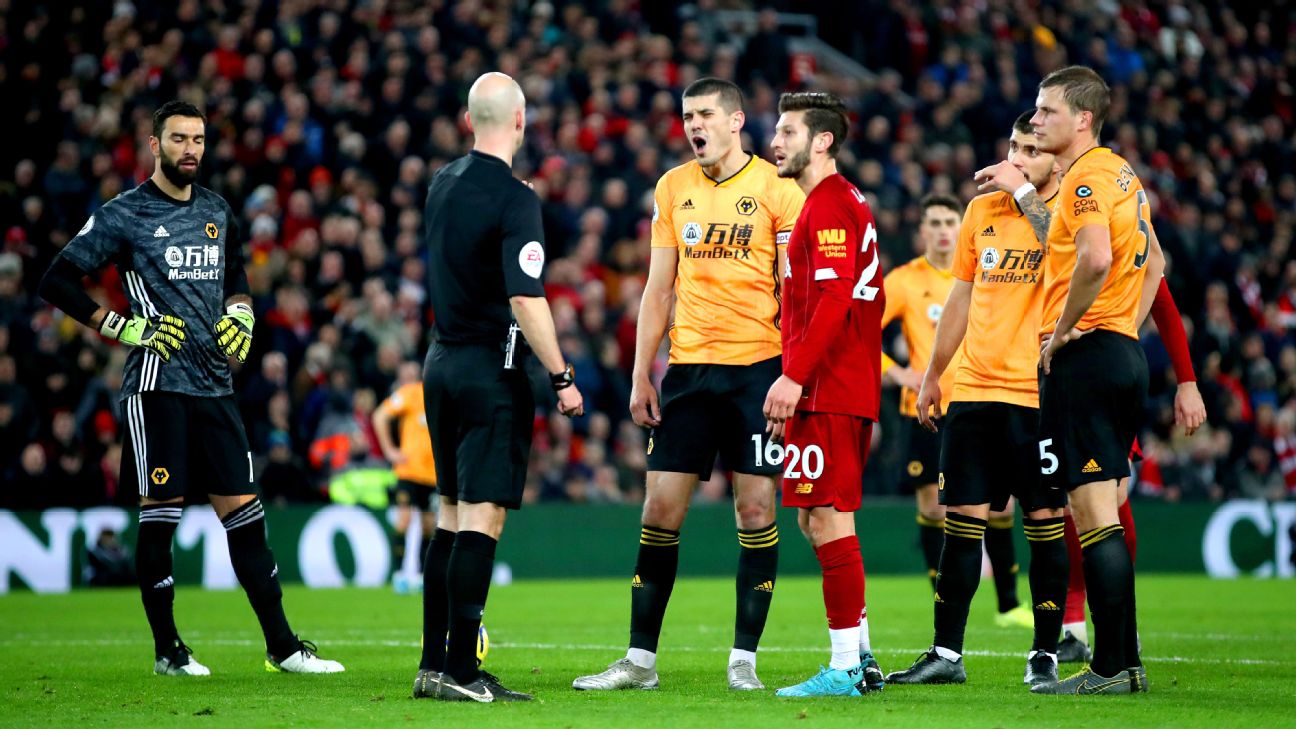 Where do you start with VAR? Seriously: which is the biggest problem with the video assistant referee system that has brought the Premier League to the brink of meltdown this season?

Is it the repeated disallowing of goals because of assorted body parts straying millimetres offside? Is it the endless wait for key decisions, such as penalty calls, to be resolved? Is it the absolute failure of a single match referee this season to walk a few yards to the side of the pitch to watch a replay of a contentious incident before deciding himself whether he was right or wrong in the first place? Or is the biggest problem, just maybe, the supporters inside the grounds who have started to rage at decisions against their team even when they are proven to be correct?

The answer, of course, is that all of the above have become major issues in their own right during this VAR-dominated Premier League season.

“Some people are saying it gets the right decision, but we’re the players on the pitch and it doesn’t feel right to me,” Wolves defender Conor Coady said after his team had lost 1-0 at Liverpool on Sunday following two key VAR decisions.

The first, when referee Anthony Taylor’s decision to disallow Sadio Mane‘s goal for Liverpool following a handball call against Adam Lallana was overturned, and the second, when VAR ruled out Pedro Neto‘s goal after Jonny had strayed marginally offside in the build-up. Both decisions were correct, so what does Coady want? Decisions that keep everybody happy even if they are wrong?

Wolves were also on the receiving end of a tight VAR call during Friday’s 3-2 win against Manchester City, when the visitors were awarded a penalty after Leander Dendoncker had stepped on Riyad Mahrez‘s foot. Match referee Martin Atkinson missed the foul but when VAR reviewed it and told Atkinson to award a penalty, Molineux erupted into loud indignation even though VAR had got it right.

Fans, players and managers have to accept that if a system has been introduced and it’s getting decisions right, then complaints about it being unfair — or, to paraphrase Coady’s words, not feeling right — are just excuses and a desperate attempt to pass the buck. Yes, VAR is proving to be unforgiving, like a speed camera set at 31 miles per hour in a 30 mph zone, but how can it be fixed so that it becomes an acceptable addition to the game?

First of all, those involved in the game have to stop looking to blame VAR when it has proven to have been correct. Nothing will change until the temperature is lowered and the rants begin to subside.

Then there are obviously areas where VAR can, and should, be amended to make it workable and realistic. The offside rule is the first place to start because with VAR, it’s become a trap that only catches attacking players. In its current form, the offside rule is being allowed to suffocate the life and enjoyment from the game, with Neto’s goal at Anfield a good example of the rule being stretched to the absolute limit of interpretation. Offside is offside and there will always be a line — whether it comes in the form of a toe, shoelace or armpit — but by changing the rule to favour the forwards, VAR could then reward attacking play and allow more goals.

Graeme Souness, the former Liverpool captain, suggested on Sky Sports at the weekend that a tweak to the law, whereby a player is onside if any part of his body is onside, would cut out the kind of controversies that we have seen so often this season. If that change was to be implemented, it would surely be more palatable for a goal to be given because a player’s armpit or toe was fractionally onside rather than have it ruled out for the same reason. Football is about entertainment after all, and fans want to see goals.

Another change that’s desperately needed is for match referees to consult the pitchside monitor for reviews rather than be left standing, finger in ear, waiting for a decision to be passed down by a fellow referee watching on a video screen in a windowless room in Stockley Park. It would be quicker and would ensure that the referee on the pitch takes charge of the situation. It would also give a visible signal to supporters, players and managers that a review is under way and allow everybody to know precisely who is making the decision.

Accountability is crucial but right now, the image that comes to mind is of a group of protractor-wielding boffins high-fiving each other in a video room whenever they catch another player offside or rule out another goal. The referee on the pitch has become a lightning rod, despite being taken out of the decision-making process once it goes to review at Stockley Park. Pitchside monitors are in place at every stadium, cutting lonely figures every time, but they work, as was proved during the 2018 World Cup and the Champions League.

Things must change with VAR, that is clear, but VAR in itself is not the problem. Those implementing it in the Premier League are making it look dysfunctional because of the way it is being used, but the fans and players also need to step back and stop blaming VAR when it is getting decisions right.