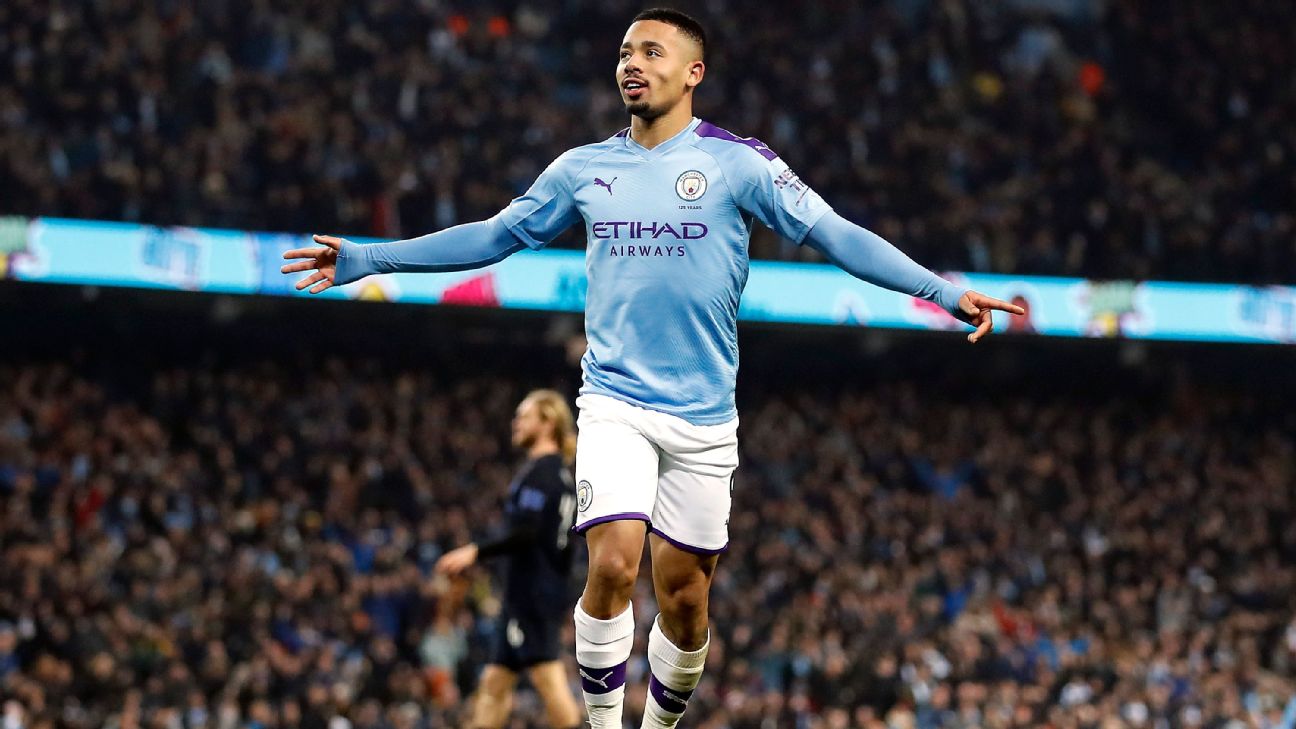 Manchester City beat Everton for the fifth time in a row Wednesday, running out 2-1 winners at the Etihad thanks to a Gabriel Jesus brace.

After choosing to rotate his squad, Pep Guardiola’s side had to first endure some early frustration, with Phil Foden seeing his early goal overturned by VAR for an offside violation. The home crowd were finally appeased in the second half, as Jesus struck twice to cap off two fine City moves within quick succession. The goals sealed a relatively straightforward victory, despite Everton rallying late on after Richarlison pounced on a Claudio Bravo error.

The victory takes City to within 14 points of table-toppers Liverpool, as the Premier League holders get off to a winning start in 2020.

Phil Foden returned to the starting XI, this time on the left wing, and looked sharp throughout, with crisp passing, and intelligent runs.

Additionally, City’s new-look formation, consisting of a makeshift 3-4-3, appeared to provide greater defensive stability, with two midfielders (Rodri and Fernandinho) making up the back line, alongside the 18-year-old Eric Garcia. Despite the lack of defensive pedigree, Pep’s tactical tweak appeared to work well. Everton created little of note for much of the game, with their only goal coming directly from a Claudio Bravo error.

For much of the first half, we witnessed a flat-looking Man City, perhaps understandable given the frequency of fixtures and their position in the league.

Additionally, sloppy passing from an overconfident Bravo continues to highlight why Ederson remains so important to City’s style of play. The Brazilian stopper should return in time for the weekend’s game after being sidelined Wednesday through illness.

7 — The City boss took a risk in choosing to rest a number of crucial attackers, and with the scoreline goalless at half-time, it looked like a decision that could prove costly. However, the side continued to create chances, with the deadly finishing of Jesus eventually paying dividends.

Elsewhere, Guardiola’s formation change, a 3-4-3, appeared to add a greater layer of defensive solidity. With Rodri, Fernandinho and Garcia at centre-half, Everton could have easily ran rampant, but the tactical tweak worked in terms of keeping the Toffees at bay.

GK Claudio Bravo, 5 — A mixed evening for the Chilean, who was filling in for Ederson after City’s number one succumbed to illness. He equipped himself well for much of the game, saving brilliantly early on from a Seamus Coleman effort — before another lackadaisical error with his feet allowed Richarlison to score, and Everton back into the game.

DF Rodri, 6 — A decent outing from the Spanish holding midfielder. Rodri was involved in all facets of the game, breaking up Everton attacks, before helping to launch City counters.

DF Eric Garcia, 7 — The academy graduate looked assured in what was a makeshift City defence, proving to be reliable in possession, as well as when facing his own goal. More Premier League minutes could be on the horizon for Garcia, with City’s regular defensive custodians looking far from convincing so far this season.

DF Fernandinho, 7 — In testing circumstances, the 33-year-old was typically committed to cause, leading his less experienced defensive partners with distinction. Alongside intelligent positioning, the Brazilian performed excellently against Everton’s aerial threat.

MF Joao Cancelo, 6 — Looked dangerous on a couple of occasions in an advanced position on the right side of midfield. Was unlucky to see his assist for Foden’s goal chalked off for offside in the build-up.

MF Benjamin Mendy, 7 — Provided City with good width on the left side, linking up well with Foden on occasions. A much-improved performance after a horror show outing at the Molineux.

MF Kevin De Bruyne, 7 — Involved in everything good that City did, drifting effortlessly around the pitch to pick up ever more threatening positions. Yet another fine display from the Belgian.

MF Ilkay Gundogan, 8 — The German was the side’s consistent creative outlet, playing some fine through balls — Including a fine assist for Jesus’ opener. He was also impactful on the defensive end, helping to turnover possession with well-timed interceptions.

FW Riyad Mahrez, 8 — The Algerian winger was one of the most influential City starters, posing a threat from the right in tandem with Cancelo. However, Mahrez drifting into an offside position cost the home side their opening goal, with VAR retroactively disallowing Foden’s first-half tap-in.

FW Gabriel Jesus, 9 — Scorer of City’s two goals, on a night that initially threatened to become a frustrating one for the Brazilian. He took them both well, sharp finishes that were by no means simple — taking his tally to 13 goals for the season. Denied a first City hat trick by the post late on.

FW Phil Foden, 8 — A tidy display overall from the young Englishman, who continues to make his case for more first-team minutes. Playing out wide, Foden looked sharp, linking up well with Jesus and Mendy. Also had an early goal ruled out by VAR.

MF David Silva, N/R – Replaced Foden for the last 10 minutes or so.

FW Raheem Sterling, N/R – On in injury time as Guardiola looked to run off a little clock and hold onto three points.