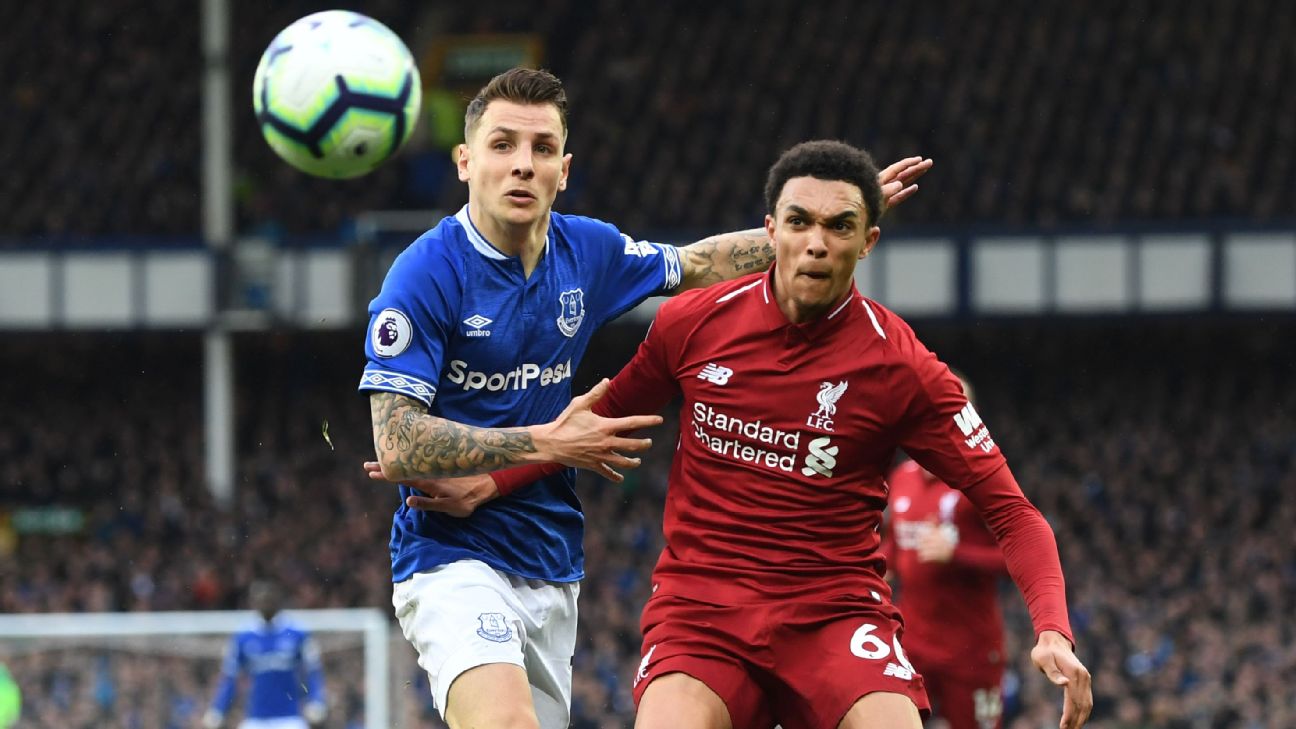 The FA Cup third round signals the entrance of the Premier League and Championship clubs to the tournament. Nick Miller previews the action, which kicks off this weekend on ESPN+, focusing on some of the bigger games and storylines to watch for.

JUMP TO: Will Rooney announce himself back into English football? | Will history repeat itself at Molineux? | Who will prevail in the Guardiola derby? | Youngsters to watch | Best chances for upsets | Long shots to watch | Game to watch | Newcastle to snap streak?

Can Everton finally get a win at Anfield?

Everton have not won a game at Anfield since 1999. That’s over 20 years and 23 games without tasting success, ever since Kevin Campbell scored the only goal in a game probably best remembered for a young Steven Gerrard being among three players sent off. Such a long run against theoretical rivals almost qualifies as bullying, but this weekend (Sunday, 11.00 a.m. ET on ESPN+) probably represents their best chance for some time of victory across Stanley Park.

That is because you suspect that Jurgen Klopp will very firmly dip into the reserves of his squad, and while the team won’t be quite as young or barren as the one they were forced to play in the Carabao Cup against Aston Villa, it won’t be too far off. The likes of Adam Lallana and Xherdan Shaqiri will get run-outs, but probably alongside youngsters such as Harvey Elliott, Ki-Jana Hoever and Sepp van den Berg. Carlo Ancelotti would be well-advised to go for the jugular in this one: Everton don’t have much to play for in the league so the FA Cup is their best chance of success this season, and the kudos of finally getting that win against the old rivals will do a new manager plenty of good.

Will Wayne Rooney announce himself back into English football?

The club have kept it pretty quiet, but in case you didn’t know, Wayne Rooney is now a Derby County player. This closely kept secret was made official on Thursday when Rooney started for and captained his new side against Barnsley. At the weekend, he will likely have a slightly more high-profile opportunity when the Rams face Crystal Palace on Sunday in the FA Cup (Sunday, 9.00 a.m. ET on ESPN+).

So the question is, does Rooney still have it? He’s 34, and given how young he was when he started he’s an “old’ 34, so it will take a little while for him to get back up to speed with English football. But Derby haven’t recruited him just to sell a few shirts: he can’t just be a famous name back home to do some coaching and make a few personal appearances; they need him. He’s obviously not the player he was, but you wouldn’t put it past Rooney to produce a moment or two of magic on the grand stage.

Will history repeat itself at Molineux

Since their return to the Premier League last season, Wolves have played Manchester United four times and haven’t lost yet, with two wins and two draws. One of those games was in this competition last term, when goals from Rail Jiménez and Diogo Jota won the quarterfinal between the two sides. Wolves followed it up a couple of weeks later with a victory in the league, around the time Ole Gunnar Solskjær’s halo was just starting to dim a bit. Now that halo is well and truly in the bin, and it would barely qualify as a surprise if Wolves repeated the trick this weekend (Saturday, 12.30 p.m. ET on ESPN+)

Who will prevail in the Guardiola derby?

FA Cup ties on a Monday night (2.55 p.m. ET on ESPN+) still feel a little bit weird, and after a weekend stuffed full of action and romance, it would be easy to forget about Leeds vs. Arsenal. But if nothing else this should be an interesting game because of the managers in either dugout: Pep Guardiola’s mentor Marcelo Bielsa, and Pep Guardiola’s mentee Mikel Arteta. These are two coaches at either end of their managerial careers, but both ones who play dynamic football so, even on the assumption that it won’t exactly be the first-choice teams playing, this should be a cracking game.

There’s also the mild intrigue around Eddie Nketiah: the young Arsenal forward has been on loan at Leeds but was recalled by the Gunners because he wasn’t really playing. He will be sent out again at some stage, but there’s a chance that he could play for his parent club against the one with which he spent the first half of the season. You talk about extra motivation …

This of course is the time for the kids. These are the games that the big teams understandably decide to excuse their established stars from participating in, and instead take a look at their youngsters. And boy, are there some intriguing prospects among the ranks of the big clubs: we’ve already mentioned a clutch of those likely to turn out for Liverpool, but there’s also Tariq Lamptey and Billy Gilmour at Chelsea, Eric Garcia and Tommy Doyle at Manchester City, Troy Parrott and Jack Clarke at Tottenham, a clutch of kids already on the fringes of the Manchester United team plus a similar bunch at Arsenal. Often these games are glorified youth team encounters, but that doesn’t mean they’re not worth watching.

The biggest chances for an upset

As ever, the main source of intrigue for the FA Cup third round is the upset, the chance of seeing some plucky upstart making richer and more prestigious foes look silly. Newport County are the team that first catches the eye, if only because they have recent form: they took Tottenham to a replay a couple of years ago and Leicester last season, as well as giving Manchester City a scare. By comparison, this year Millwall (Saturday, 7.30 a.m. ET on ESPN+) will look positively beatable.

Tranmere might be worth a look against Watford, Championship strugglers Luton face beleaguered Bournemouth in a battle of who can take their mind off their league woes the most effectively and Nottingham Forest could beat Chelsea if Frank Lampard’s side take their eye off the ball.

But if it’s proper FA Cup giant-killing you’re after, look no further than Sheffield United’s opponents AFC Fylde (Sunday, 9.00 a.m. ET on ESPN+), one of only two non-league teams left in the competition. They’re certainly an interesting club, more comfortably funded than many their size and who tempted manager Jim Bentley away from League Two Morecambe earlier this season. They’re owned by local businessman David Haythornthwaite, who raised eyebrows earlier this year when he erected a pro-Brexit billboard at the club’s ground, urging then Prime Minister Theresa May not to “surrender” to Europe.

They also have some extremely tenuous links to FA Cup history: their goalkeeper James Montgomery’s grandfather was the cousin of Jimmy Montgomery, the man who was in goal for Sunderland when they shocked Leeds United in the 1973 final. We did tell you it was tenuous.

The game you’re not planning to watch … but should

On the face of it, this isn’t the most interesting tie. It’s between two teams who, while in different divisions, are still relatively familiar with each other, have other things on their minds and will almost certainly “rotate” heavily. But it should be interesting to watch, if only because a defeat by Tottenham could signal that things are already starting to unravel under Jose Mourinho.

The defeat to Southampton at the weekend was one indicator that all isn’t well, plus Mourinho is already showing signs that the new relaxed and cuddly Jose is actually a myth, and that he is just the same old character he always was. If Boro win, the hope brought about by a good half an hour or so in his first game against West Ham will feel like the most distant of memories for Spurs fans, and who knows what could happen next.

The team that needs a bit of luck:

Not that they’ve been particularly hot in the league over recent years, but Newcastle United’s record in cup competitions, particularly the FA Cup, is almost comically abysmal. They haven’t got past the fourth round in the past 13 attempts, which for a team who have spent all of that time either in the top tier or at the top of the second, is almost impressively incompetent. Only someone with a heart of stone, or a Sunderland fan, would begrudge a Newcastle support, who have suffered only drudgery in recent years, a little joy. But knowing their luck they’ll somehow find a way to lose to League One Rochdale (Saturday, 7.30 a.m. ET on ESPN+).