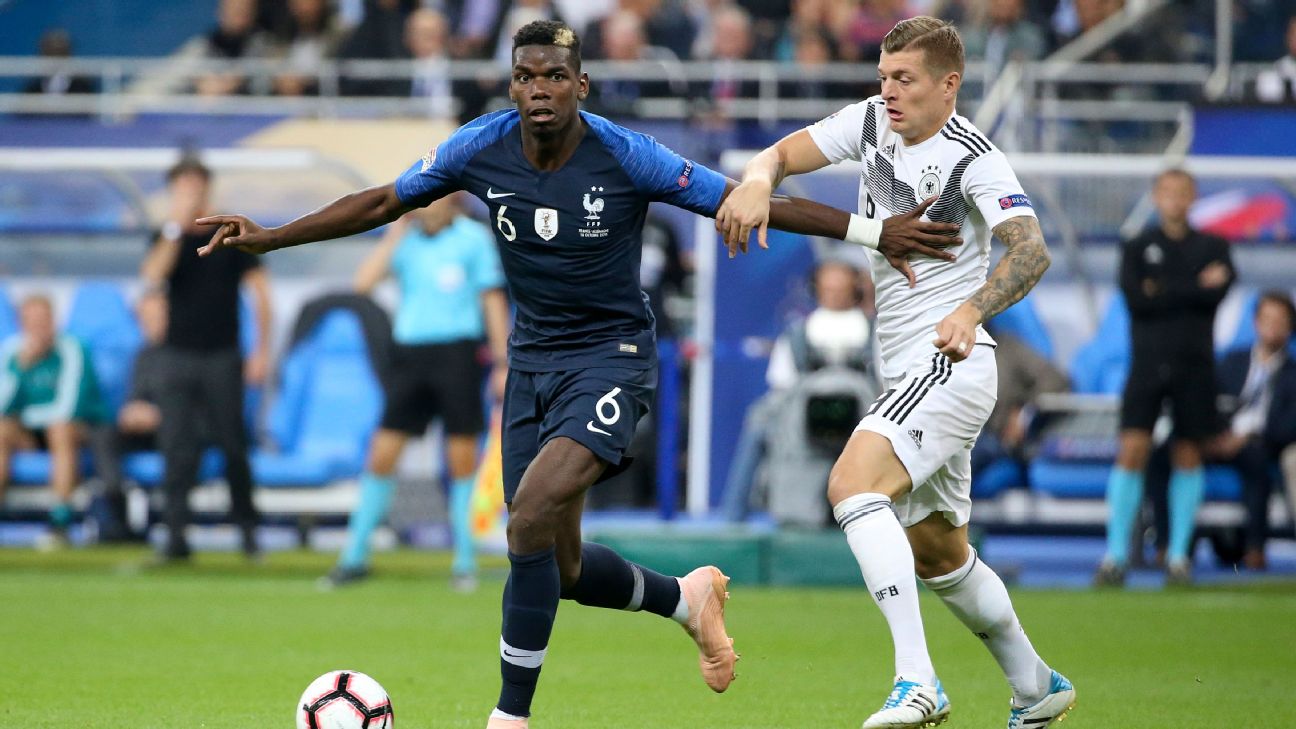 Whilst a cloud of mystery continues to swirl over the future of Manchester United’s Paul Pogba, both Juventus manager Maurizio Sarri and Real Madrid boss Zinedine Zidane are doing everything they can to land the France midfielder.

According to the Sun, Juventus are preparing to tempt United with an exchange deal that would see Pogba’s World Cup-winning teammate Adrien Rabiot head the other way, while Zidane is willing to offer the services of Toni Kroos in order to seal a deal, despite being coy when recently questioned about his interest in Red Devils’ star.

Both players are former targets of the Premier League side, but the old lady are hopeful that the capture of Rabiot, 24, will convince United to do a deal in January whilst slashing £25 million off Pogba’s hefty price tag, rumoured to be a whopping £180m.

Madrid are believed to have been keen to show Kroos, 29, the Bernabeu exit door door at some time, and the player almost moved to the North of England from Bayern Munich five years ago, before opting to move to Spain instead.

Any swap deal would likely be best for all parties, with United short on options in midfield following recent injuries to Pogba and Scott McTominay, while the former is reported to be desperately seeking an end to his Manchester misery as he looks to satisfy his craving for silverware.

Meanwhile, Gazzetta report that Red Devils’ defender Chris Smalling is desperate to turn his loan spell with Serie A side Roma into a permanent deal at the end of the current campaign.

The Italian publication claim the former England man has “fallen in love” with the club and has told United bosses that he doesn’t want to return to Manchester in the summer.

Smalling, 30, has surprised everyone, including his parent club, with a string of fine performances at the heart of the Giallorossi backline this season and could prove a steal with the potential fee involved reported to be around £12.5 million.

United are far from short on options at centre-back, with Axel Tuanzebe, Eric Bailly, Marcos Rojo and Phil Jones all available as cover for Harry Maguire and long-term option Victor Lindelof.

According to Gazzetta, Smalling’s agent has now flown out as the player looks to push through a deal.

The France midfielder moved to the Spanish capital just 18 months ago, but has struggled to find his best form in La Liga and has failed to find the net in 21 appearances this season. The Gunners were previously interested in signing the 24-year-old whilst he was playing for former club Monaco, but they face competition from fierce rivals Tottenham who also want to bring Lemar to the Premier League.

However, both clubs are believed to be reluctant to splash out the £50 million Atletico parted with to land Lemar in summer 2018, with the Spanish side keen to recoup as much of that fee as possible, although reports suggest a loan move is a possibility.

The player’s fitness levels could also play a big part in any deal, with Lemar currently enduring a spell on the sidelines.

— With Pogba set for a spell on the sidelines — and possibly the exit door — Manchester United appear to have missed out on another creative midfielder in Jack Grealish. That’s according to the Daily Mirror, who report that Tottenham are also set to be disappointed in their quest to land the midfielder, who has struck eight times this season and assisted six more. According to the Mirror, Grealish’s manager, Dean Smith, told supporters: “He’s a top player but as I’ve said before, our owners are very ambitious…we’ll be keeping hold of Jack Grealish.”

— Whilst bitter rivals Liverpool are loving life at the top, the Sun reports that Everton’s eyes are on Roma’s Cengiz Under as Carlo Ancelotti looks to bring his fresh faces. According to the Sun, the Turkey winger — also believed to be target for Mikel Arteta’s Arsenal — sits high on their list of top targets having fallen out of favour at the Stadio Olimpico.