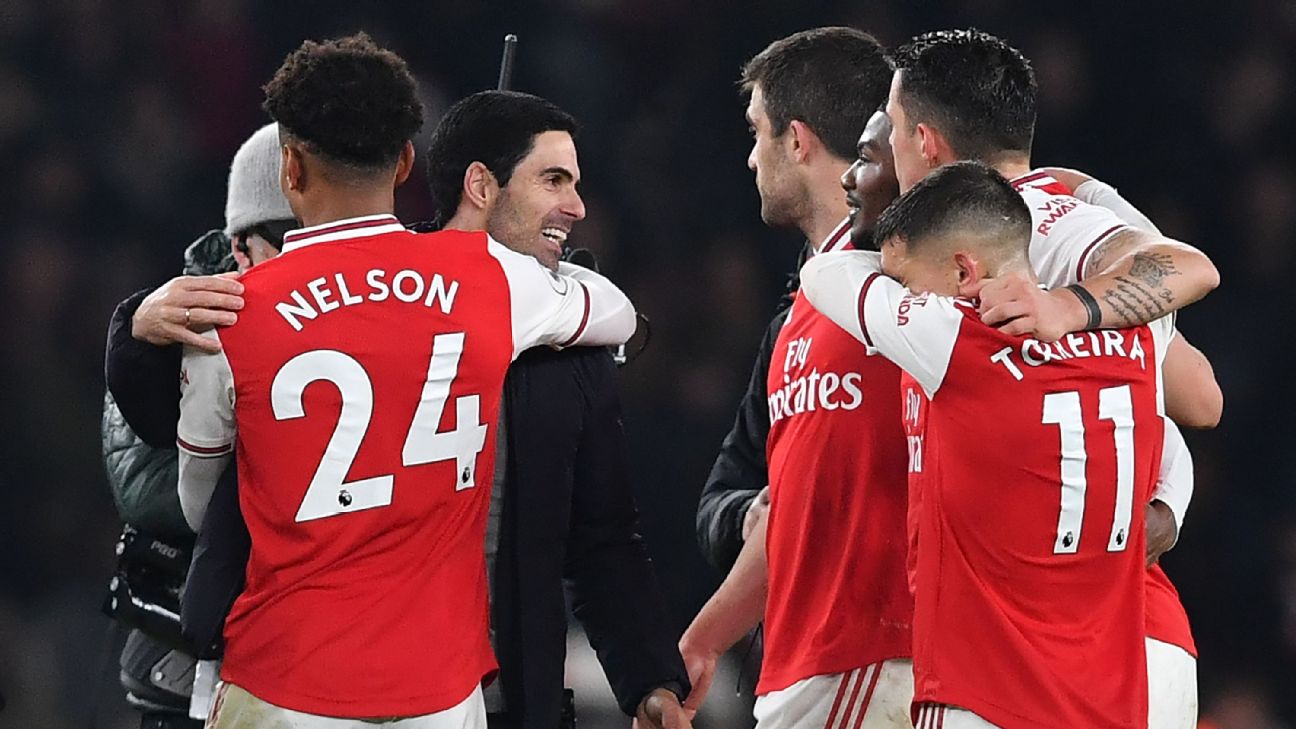 LONDON — It had just gone 11.30 p.m. on New Year’s Day when new Arsenal manager Mikel Arteta left Emirates Stadium victorious against Manchester United, driving off in his Mercedes with his wife, Lorena, beside him, flashing a big smile and waving to those who he passed.

He was not the last one to leave, either. The first goal scorer of the evening, Pierre-Emerick Aubameyang, and a number of family and friends in buoyant mood mingled inside the players’ entrance, and Barcelona’s Samuel Umtiti — enjoying a brief winter break from his club — patiently waited for his longtime friend, Alexandre Lacazette, so they could ring in the new year.

The positive atmosphere was palpable around the club after the win over United, arguably their most impressive team performance in months. It was a mixture of relief and happiness, of course, but more importantly, there was a sense of reward that all the hard work done in a short time under Arteta since he arrived on Dec. 21 had begun to pay off.

The Gunners had come close to a result against Chelsea three days earlier but suffered a late and cruel loss, beaten 2-1 thanks to a pair of self-inflicted mistakes in the final seven minutes. Yet after that game, the new head coach had only positive words for his players, telling them they were on the right path and, regardless of how much it hurt to lose a match such as this — a London derby, no less — they were improving rapidly.

The players felt it. Since Arteta’s appointment two weeks ago, they’ve had no days off. They’ve spent time working on their collective shape and with a medium block when they don’t have the ball. The intense, hands-on work is already paying off and will come in handy on Monday in the FA Cup, when they host Leeds United at the Emirates (3 p.m. ET on ESPN+).

Individually, the manager has put great emphasis on tactical positions and on the small but crucial details, such as the positions of players’ bodies and their vision when receiving the ball. They’ve practised the long, diagonal passes to switch the play that have been on display all season at Liverpool, to name just one club. The Arsenal players have also worked tirelessly on how to be better and sharper in transition, both offensively and defensively, working to find more space and exploit it better. This was evident against Man United, many felt they were watching the Arsenal they thought they had lost.

Arteta has been working his squad hard the whole time with little respite. On Christmas Day, they enjoyed an early breakfast together at 8 a.m. while on the eve of the Chelsea match, they travelled to the Emirates for a 45-minute tactical session before leaving for the team hotel. To implement his ideas and philosophy, Arteta has had to run a crash course; the team has done plenty of video analysis around their past three on-pitch performances, as well as their training sessions. Arteta is very demanding when it comes to what he asks of his players, and he wants them to learn quickly. As one player put it, there is a structure, but with freedom inside it.

Overall, despite Arteta’s being in charge for a short time, the changes at Arsenal have been clear to see and significant compared to his predecessor’s methods. The patterns of play are obvious, particularly in the buildup play. Take, for example, the way Granit Xhaka drops into the left-back position, with Aubameyang coming inside to leave the whole left side for his full-back to exploit.

Arteta has also worked a lot with Mesut Ozil. Not only does he want the playmaker to be a key part in his team, but he has also changed Ozil’s position, asking him to take up “half spaces” on the right side when Arsenal have the ball. If Ozil was unsure of his future when Arteta arrived, even though they were in the same Arsenal XI at the tail end of his new manager’s playing days, he has been boosted by the faith shown. Sources say Ozil is a totally changed player compared to the one booed by home fans a few weeks ago. He is impressive at training and influential in matches.

However, arguably the biggest change has been not tactically but mentally. Arteta has been very clear since day 1 about what he calls the “non-negotiables.” The attitude of each and every player has to be perfect.

When Arteta was appointed before the Everton game, he told his new squad that he would be sitting in the stands at Goodison Park watching their attitude and their effort with and without the ball. Before his first game in charge at Bournemouth, he told them again: “If you don’t give everything, you are out of the team. It doesn’t matter who you are.”

Arteta has been insistent about that energy and commitment from his players, especially when losing possession and using a high press to get the ball back as quickly as possible. Before each game, the players gather for a group huddle in which Aubameyang gives a pep talk. After the United game, Arteta told his players to go and clap the crowd “together.” The togetherness shown by the Gunners is probably what pleases Arteta the most. They attack and defend together; they press and close down as one.

If he was asking for a completely different mindset, a more aggressive approach, more intensity and more running, the players definitively responded.

But where the Spaniard has shown his real strength is in his man-management. He is very demanding and wants his players to give everything, but he has to be credible and a strong leader. Promising midfielder Joseph Willock describes him as “stern and relatable.” Arteta had a chat with the club’s five captains — Aubameyang, Xhaka, Ozil, Lacazette and Hector Bellerin — to ensure that his message was understood and relayed within the squad by the senior players.

In addition to being tough, Arteta has taken time to speak individually to those players who arguably needed it most. He took Xhaka to one side, convincing him to stay after been ostracised after a well-publicised fall-out with the club’s supporters. He also made time for Reiss Nelson, who did well against Chelsea, and club-record signing Nicolas Pepe, who have improved in training and have earned another chance.

On the morning of the United game, Arsenal players were again told to be at the stadium first thing for a light training session before they headed to the team hotel for final preparations. Arteta took time to speak with Pepe, asking him how he was feeling and if he felt ready to start. It gave Pepe the boost and confidence he needed. It was his mother’s birthday on New Year’s Eve, and he wanted to make her proud. He wanted to make Arteta proud as well and repay him for his trust.

Indeed, all the Arsenal players made Arteta proud that day. He told them so. He also told them that it was the beginning of something special.