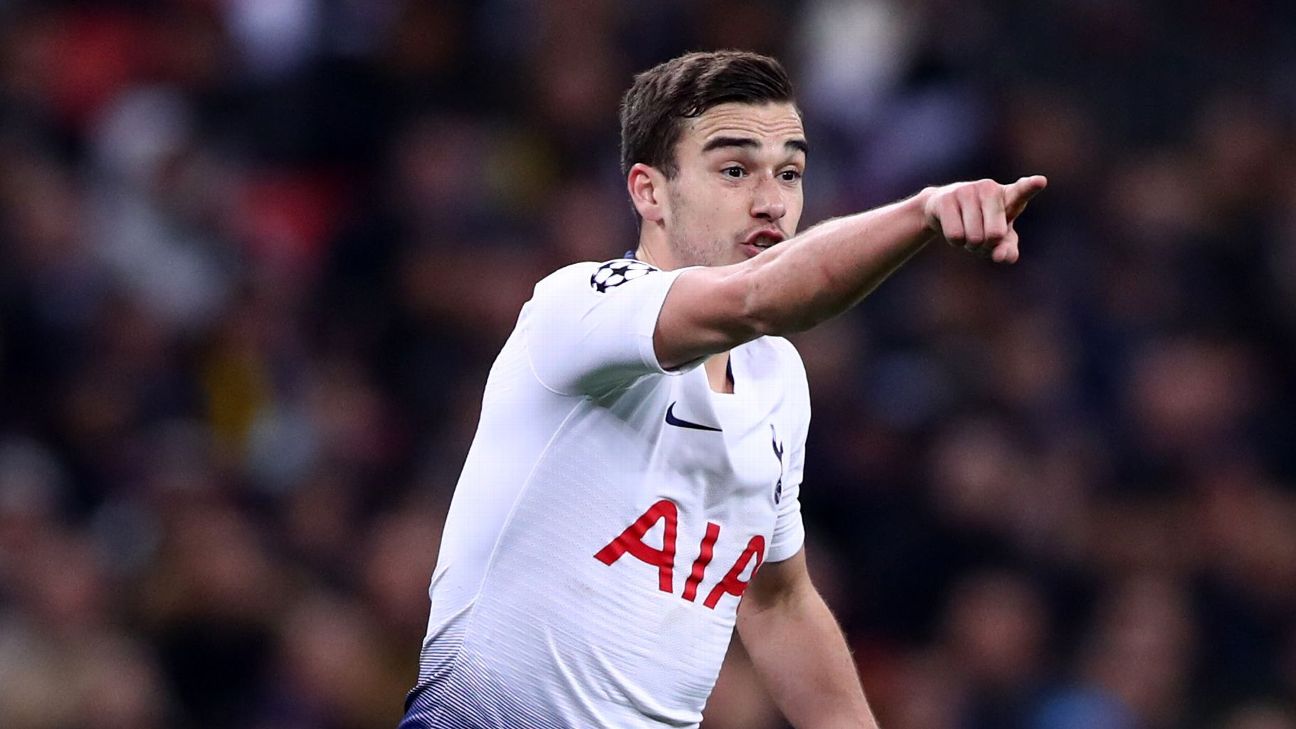 TOP STORY: Man United and City to battle for Winks?

Here’s a name that hasn’t appeared on the transfer pages for quite some time: Tottenham and England midfielder Harry Winks.

The Athletic reports that Winks is a January target for Man United, given he’s young and British, but rivals City also want the midfielder for the summer as he considers his future under new coach Jose Mourinho.

While United are having a midfield crisis at the moment, City are more worried about their defence and the same report says that Pep Guardiola has up to five options to improve his backline with Inter Milan’s Milan Skriniar and Shakhtar Donetsk’s Mykola Matviyenko the top two.

10.09 GMT: Barcelona are standing firm on their desire to keep hold of Arturo Vidal this month, sources have told ESPN.

The Chilean, who is involved in a legal dispute with the club over an alleged unpaid bonus, is open to joining Inter Milan. He is not a regular starter at Camp Nou and has spoken of his desire to “feel important.”

Barca coach Ernesto Valverde doesn’t want him to leave, though. Speaking after Vidal scored in Saturday’s draw with Espanyol, he spoke about how essential the midfielder is due to the fact he offers something different to the other players in the squad.

With a contract until 2021, — plus the fact Carles Alena has already joined Betis on loan — sources as Barca continue to insist they will snub Inter’s advances unless the Italians were to come up with an irresistible offer.

09.41 GMT: Chelsea want a left-back so it’s only fitting that they go after the world’s best. Bayern Munich’s David Alaba has 18 months left on his contract and could be keen on a new challenge, says the Mirror.

The figure quoted is £60m which seems a bit small for a player of the Austrian’s quality but it’s certainly worth a try.

09.16 GMT: Flamengo midfielder Reinier is playing the waiting game amid reports that he is about to be transferred to Real Madrid.

The player, who turns 18 on Jan. 19, is training with Brazil’s U23 squad but Marca claims his move to Madrid is a done deal with Real Madrid paying his €30m release clause.

When asked about his potential move to Real Madrid, Reinier told reporters: “Let’s wait and see.”

Barcelona, Atletico Madrid, Manchester City and Paris Saint-Germain were also interested in the Brazilian and his release clause was reduced from €70m to €30m when the player signed a new contract in November.

According to GloboEsporte, Reinier will not remain at Flamengo for another six months and will instead join Real Madrid once the pre-Olympic tournament ends in February.

08.33 GMT: Rennes hope to keep hold of teenage sensation Eduardo Camavinga despite interest from many of Europe’s top clubs.

The midfielder, 17, has established himself as a regular in the Rennes team since making his debut as a 16-year-old in April 2019. Camavinga, who has made 23 appaearances in all competitions this term, has attracted interest from clubs including Real Madrid, Paris Saint-Germain, Manchester United, Arsenal and Tottenham.

Rennes president Olivier Letang told TF1’s Telefoot: “I would like to keep him for 10 years. The goal is to continue in his company. Today, we want to keep him.

When asked specifically about approaches from clubs in Ligue 1 and abroad, Letang added: Yes [on a possible future sale to a Ligue 1 team], but that question has not yet presented itself. Yes, some [European clubs] have approached us.”

08.00 GMT: Liverpool’s young FA cup hero Curtis Jones has a bright future at the club, according to manager Jurgen Klopp, amid reports that the teenager is wanted on loan by several clubs.

Jones, scored his first senior goal for the club with a stunning curled effort from the edge of the box to seal a 1-0 win over Everton in their FA Cup third-round tie at Anfield on Sunday (stream the replay on ESPN+ in the U.S.).

“Unbelievable player, Scouser, very confident, can’t wait to play in the first team, good, rightly so, he is [on] a very good way,” Klopp said after the match. “I have known him for three-and-a-half years, he has made big steps, will 100% be a Liverpool player, if nothing strange happens. Great.”

Last week, Jones was being linked with interest from Championship club Stoke City, who reportedly made an official enquiry about taking him on loan for the remainder of the season.

Bayern Munich are plotting a move for Real Madrid full-back Achraf Hakimi, who has impressed during a loan spell at fellow Bundesliga side Borussia Dortmund, according to reports at Marca.

The 21-year-old struggled for regular game time at the Bernabeu after breaking into the Madrid first team in 2017, and during his near-two-year stint in Dortmund, the Moroccan has shone in a number of different positions. Bayern have identified the player’s positional flexibility as a key factor in their decision to pursue the signing

Achraf is believed to be toying with the idea of staying in Germany, with his first-team opportunities back in Spain still largely limited by the presence of Dani Carvajal and Alvaro Odriozola in his preferred right-back position at Real.

A decision on the Morocco international’s future is set to be made in July, when the player’s loan at Dortmund ends.

Juventus remain hopeful of completing a deal to sign Mauro Icardi from Inter Milan this summer, despite the striker looking destined to complete a permanent switch to Paris Saint-Germain at the end of the season.

Calciomercato claims Juve sporting director Fabio Paratici is a big fan of the Argentine, and was interested in doing a deal for the 26-year-old last summer, before the former Sampdoria man opted for a loan switch to Paris instead.

An agreement is in place for PSG to seal a €70m permanent switch for Icardi, but reports claim there is a clause in the deal to allow the striker to pull out of a move.

Icardi has been in excellent form for Thomas Tuchel’s side since joining the Ligue 1 champions in the summer, notching 14 goals in 18 appearances in all competitions.

Conte keen on move for Alonso

The Spaniard has featured just eight times for Frank Lampard’s side in the Premier League this season, with the likes of Cesar Azpilicueta and Emerson being preferred for the left-back slot by Lampard over the course of the campaign.

Alonso was a regular under Conte as the pair won the Premier League title together in the 2016-17 season, and the Italian is keen on a reunion with the former Bolton Wanderers man.

Two potential deals are on the table: Either a €35 million move this month, or a loan deal with an obligation to buy at the end of the season.

– After a nightmare spell in Serie A with AC Milan, Ante Rebic looks set to be shown the exit door at the San Siro, according to reports at Calciomercato. The Croatian only joined the Rossoneri from Eintracht Frankfurt last summer, but after just seven appearances in six months, the winger could be set for a return to the Bundesliga.

– Leicester City could make a loan move for Juventus defender Merih Demiral, after having a £25 million bid knocked back by the Serie A champions, according to reports at The Sun. The Foxes are keen to bolster their defensive ranks amid a string of injuries at the back.

- Han Kwang Song looks set to be the second Juventus striker to depart for Qatari side Al-Duhail in a matter of days, according to reports at Calciomercato. The North Korean forward has arrived in the Gulf state to complete the move, where he could potentially line up alongside Mario Mandzukic, who recently completed the move from Turin.