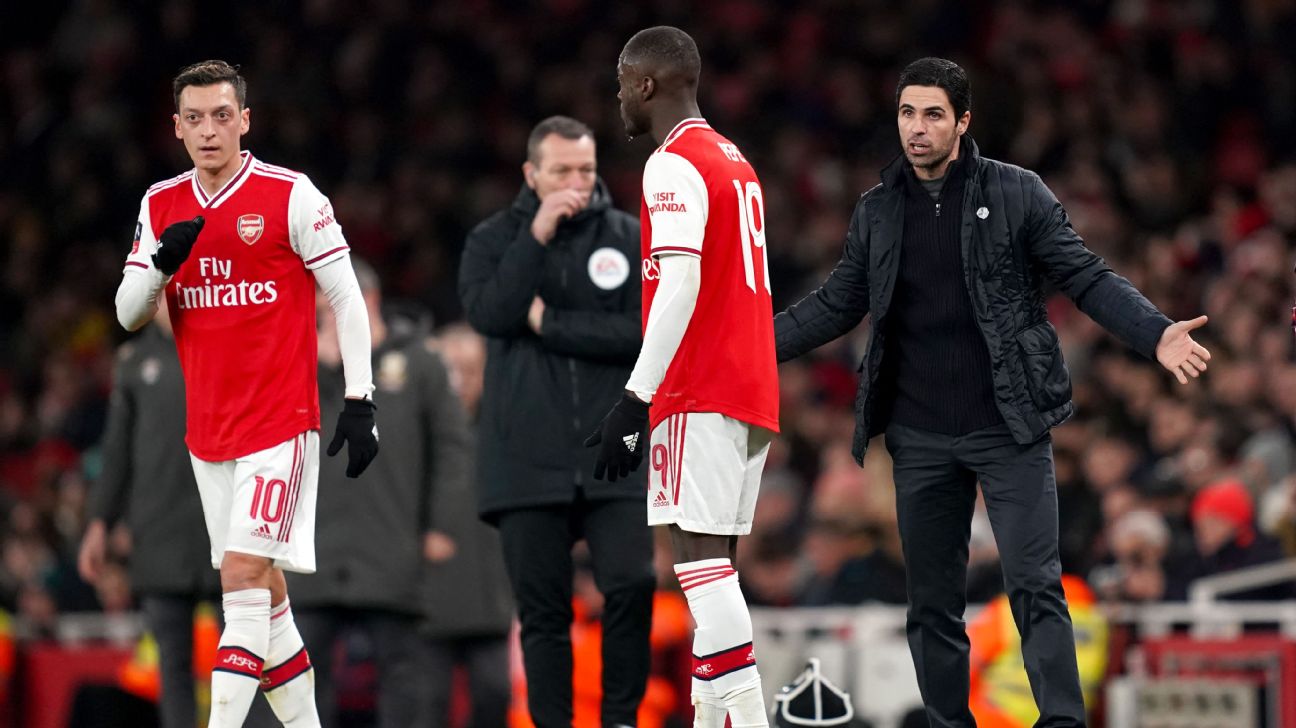 – Watch all FA Cup matches and replays on ESPN+ (U.S. only)

“The manager shouted a lot. He was not happy because we knew they’d play like this and we didn’t respect what he had said,” Lacazette told the BBC after the 1-0 win.

Leeds controlled the ball for almost two-thirds of the opening period and fired in 15 shots to Arsenal’s three but failed to score as the home side’s stand-in goalkeeper Emiliano Martinez — and the crossbar — kept the ball out. Arsenal earned a win thanks to a Reiss Nelson strike 10 minutes after the break.

The pressing ability of Championship leaders Leeds under influential Argentine coach Marcelo Bielsa, known for his brand of hard-running football dubbed “Bielsa-ball,” had Arsenal on the back foot.

“The emotions are high,” said Nelson after scoring his second goal of the season. “They played well in the first half. Leeds are a great team and they pressed us, we didn’t expect it. We got the goal in the end and that is the most important thing.

“This will give us confidence to go forward.”

Arteta described playing Bielsa’s side as being like a nightmare trip to the dentist after his side battled back following a first half in which they were overrun.

“A nightmare for every team. To play against them is painful like going to the dentist — it’s tough. They are a great team and what they’ve built is powerful,” Arteta said.

“If you’re not ready for Leeds, you’ll get exposed.”

Arteta was so incensed at Arsenal’s first-half performance that he gave the players a talking to at the break and his approach seemed to work as they improved in the second half.

“We had to react. The biggest change was how aggressive we are, making runs forward and being positive,” Arteta told reporters after a match which

“The players are not used to a transition game, and they have to experience it,” added the Spaniard, despite his Premier League team being packed with multi-million pound players from around Europe and Brazil.

For Bielsa, the loss was disappointing but did show that his side will be able to hold their own in the Premier League should they achieve promotion at the end of their season.

Arteta said Arsenal’s 2-0 home win over Manchester United in the Premier League on New Year’s Day had taken some of the heat off his struggling side but they could not afford to ease up.

“It was a big release for them when they won against United and they took a little bit of that pressure off. And then your body and your mind tries to relax a little bit,” he said.

“We are not in a position to relax because we are not good enough to relax,” added the Spaniard, who last month replaced sacked compatriot Unai Emery.

Information from Reuters was used in the report.