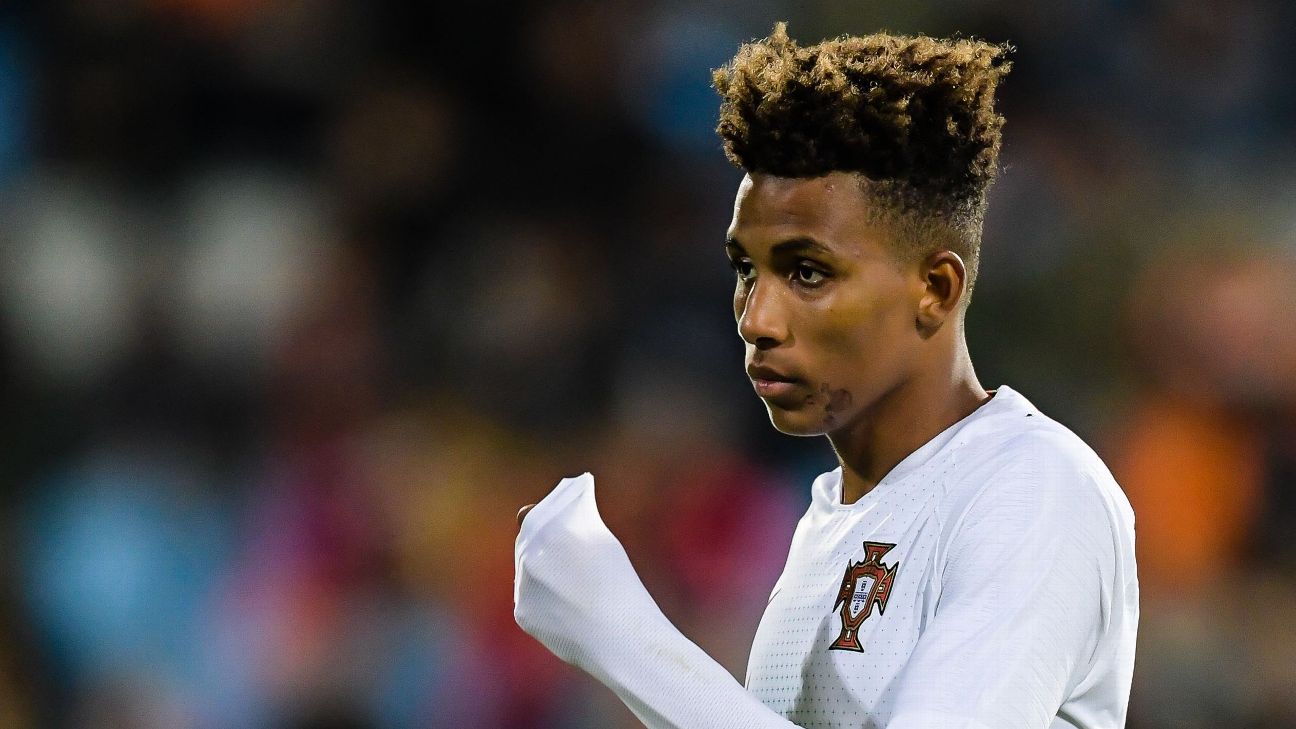 The offer in question is believed to be a loan deal for 18 months, with the obligation to buy in the future for a fee of around £55 million.

The Blues will need to battle it out with a series of clubs in order to try and get the deal over the finish line, with the most notable being West Ham — who Fernandes was said to be favouring not so long ago — and Manchester United, who are looking to rebuiild their midfield.

The Hammers’ latest offer was also for an 18-month loan but with a lower obligation to buy for £33m and has been accepted in principle. Of course, the player will also be thinking about where he has the best chance of playing regularly.

15.32 GMT: Benfica’s Chris Willock (brother of Arsenal’s Joe) is keen to pursue a permanent move back to England, sources have told ESPN.

Barnsley and Charlton Athletic are interested in Willock, who is on loan at West Brom, and he is keen to return to England for good in the hope of securing regular first-team football.

Meanwhile, Brighton’s Archie Davis, 21, is open to a move away from the Premier League club, with sources telling ESPN both Crawley and Bolton Wanderers are keen on a deal for the midfielder.

14.53 GMT: Chelsea have found great success this season blooding their young players and Reece James is one.

The 20-year-old full-back has impressed in the Premier League and, though his contract doesn’t expire until the summer of 2022, he’s reportedly set to sign a new five-year deal, says the Daily Telegraph.

14.34 GMT: Arsenal manager Mikel Arteta confirmed that he is “not expecting big things” to happen for the club during this transfer window.

The Gunners have been linked to several players including RB Leipzig’s Dayot Upamecano and Atletico Madrid’s Thomas Lemar but Arteta reiterated that his main focus was the players he already has.

Arteta also reiterated that he was keen to keep Pierre-Emerick Aubameyang  but that no contract negotiations had started yet.

Last year’s golden boot winner had been linked with a move away from the club but wrote in the club’s recent matchday programme that he is “committed” to Arsenal.

“My intention is to keep Auba obviously because I know that if we keep Auba with us, we’re going to be stronger and closer to winning football matches. That’s the only thing,” Arteta said

14.15 GMT: Liverpool legend Steven Gerrard has said he had trials with Manchester United as a youngster but always knew he wanted to play at Anfield.

Gerrard spent the majority of his playing career at Liverpool before leaving in 2015 to play for LA Galaxy in Major League Soccer.

14.00 GMT: Sky Sports News has an update on Tottenham midfielder Christian Eriksen, claiming Man United are not interested in signing him anymore.

It adds: “Eriksen sees his future away from the Premier League and is likely to be on his way to Inter Milan.”

13.25 GMT: Update on Chicharito. The Mexico striker has been approached by some MLS clubs, but sources have told ESPN that he wants to remain in Europe for now.

The 31-year-old only joined La Liga side Sevilla from West Ham in the summer after signing a three-year deal and is not ready to leave yet despite having only played 782 minutes in all competitions.

Chicharito’s situation under Julen Lopetegui is unlikely to change, with Sevilla looking to bolster their attacking line further during the January transfer window, but sources close to the player have told ESPN that the striker is still not yet considering a move away.

Is he United’s saviour? Or will he just be sent on loan somewhere else?

12.35 GMT: Could Javier ‘Chicharito’ Hernandez be on his way to replace Zlatan Ibrahimovic at LA Galaxy?

Babel, 33, started his career at Ajax and now returns amid reported interest from Newcastle United, after spells with Liverpool, Besiktas and Fulham.

Bayern want Sane, 23, but the Germany international suffered an anterior cruciate ligament injury before a summer deal could be done. Reports had suggested Bayern could try again in January, but that won’t happen.

“No, it is not an option in winter,” Salihamidzic told German outlet Bild.

11.20 GMT: Lille’s Boubakary Soumare is now on the radar of Arsenal, alongside Manchester United and Chelsea, reports Sky Sports.

Soumare, 20, has been attracting plenty of interest this window and Real Madrid and Valencia are also keen on the defensive midfielder, who could cost around €50m to sign.

11.05 GMT: Fabio Borini has agreed to a move from AC Milan to Hellas Verona, sources have confirmed to ESPN.

Borini, 28, will join Verona on a deal until the end of the season, having barely featured for Milan this term. The former Liverpool forward had previously attracted interest from England and other teams in Serie A.

10.59 GMT: Liverpool midfielder Allan Rodrigues de Souza has signed for Atletico Mineiro on a permanent deal for £3.2m, having failed to secure a work permit for the UK.

10.45 GMT: Real Madrid forward Gareth Bale is not interested in a move to play in Major League Soccer, his agent has told ESPN.

Jonathan Barnett said the Wales international, who has won four Champions Leagues, is “going nowhere” in the January transfer window and is “very unlikely” to leave Madrid in the summer.

10.04 GMT: Carles Alena has risked the ire of Barcelona supporters by saying he would never rule out crossing the Clasico divide and signing for Real Madrid.

Luis Figo remains despised to this day at Camp Nou for quitting the club for Madrid 20 years ago but Alena, who is currently on loan at Real Betis, won’t rule out making the same move.

“A lot of things happen in football, you never know,” he told Cadena Ser when asked if he would sign for Madrid if the opportunity were to arise in the future.

Alena left Barca for Betis earlier this month in search of regular top-flight football. He said he made the decision to move in October due to a lack of game time under Ernesto Valverde.

09.40 GMT: Raul De Tomas becomes the most expensive signing in Espanyol’s history as his €20m move from Benfica has been confirmed.

Diop, 22, has also attracted interest from Tottenham and Man United in the past, but Chelsea “are preparing an imminent £40m offer” for the Frenchman.

09.11 GMT: Tottenham and Newcastle want a new striker and have been linked to AC Milan’s Krzysztof Piatek, but Aston Villa are front of the queue with reports they are set to bid €30m for him.

Piatek, 24, was being linked with Chelsea and Man United not long ago. Here’s the FC TV take.

08.54 GMT: Arsenal striker Tyreece John-Jules is set to depart on loan to League One side Lincoln City.

John-Jules, 18, is highly rated but won’t break through into the first-team this season and Football.London reports that Mikel Arteta has sanctioned a loan move.

Reina, 37, is tied to AC Milan until June 2021 but will join Villa until the end of the season, with an option to remain for the 2020-21 campaign should the club remain in the Premier League.

The Spaniard has made one league appearance for the Rossoneri this season.

08.19 GMT: Globo Esporte reports that Barcelona have made a €6m offer to Palmeiras for Brazilian midfielder Matheus Fernandes.

Barca reportedly made an initial approach regarding Fernandes in recent days and, according to the Brazilian outlet, the offer also includes performance-related bonuses.

However, Palmeiras needs the approval of Fernandes’ former club Botafogo to sell the player as they acquired 75% of his sporting rights for €3.5m last season.

The 21-year-old is under contract through 2023 but, while he lacked opportunities under coaches Luiz Felipe Scolari and Mano Menezes, he ended the season as a starter under interim coach Andrey Lopes. It’s not the first time Barca have shown an interest in the Brazilian with the Catalan outfit having monitored the player in 2017 when he was doing well at Botafogo.

Manchester United are interested in a new defender in the January transfer window, with the Daily Star saying Hellas Verona’s Marash Kumbulla is on their radar.

A recent injury setback for £80m defender Harry Maguire has opened the door for a potential deal for the Red Devils.

That would open the door for Albania international Kumbulla, who could come with a £13m pricetag. Other Serie A sides reportedly interested in Kumbulla are Atalanta, Inter Milan and Napoli.

With other alternatives also on the shelf or out of form, desperate times call for desperate measures as Ole Gunnar Solskjaer attempts to get United’s season back on track.

Ahead of the game against Norwich City, there’s a very real chance that Victor Lindelof could be the only fit natural centre-back.

As reported by Daily Record, Lyon forward Moussa Dembele has agreed to personal terms with Chelsea.

The Blues aren’t wasting any time in the January transfer window as they attempt to take advantage of the fact that they’re able to purchase players once again.

Frank Lampard has clearly been interested in Dembele for a while, and now he’s looking to act on it. Celtic will receive a transfer windfall if the €40m deal does indeed go through, with a sell-on fee of around 10%.

Paris Saint-Germain duo Kylian Mbappe and Mauro Icardi are firmly focused on the season and are not interested in talking about contract extensions.

Mbappe has been linked with a move to Real Madrid but the World Cup winner said on Wednesday that he doesn’t want to distract Les Parisiens, who are vying for four trophies this term.

“I am ready to play football at present. It is January and it is the start of the sprint finish with the title in play. I do not think it is the moment to make waves. The club is calm and serene, with everybody pulling in the same direction. Talking about things away from the pitch is not very realistic and not very beneficial for the team,” Mbappe said after PSG’s 6-1 thrashing of Saint-Etienne in French Cup action.

Meanwhile, on-loan Icardi is hoping for a permanent move to the French capital from Inter Milan. But his stellar PSG form — 17 goals in 19 games — could see the Serie A leaders call the Argentine back to San Siro at the end of the season.

“We will sit down at the end of the season, but I would be happy to stay here — if that is ultimately the case,” Icardi said.

– The Telegraph is reporting that Chelsea face a battle to keep youngster Tariq Lamptey on their hands. The teenage sensation is in the last year of his contract with the club, and while the Blues want him to sign a new contract, French club Nice are willing to make a cash offer in order to bring him over to Ligue 1.

– Manchester United will not pursue the signing of James Maddison in January but remain confident of their ability to get a deal done in the summer, Manchester Evening News reports. The popular Leicester star has been turning heads since the start of the campaign, and United have been keeping tabs along the way as they look ahead to the summer transfer window.