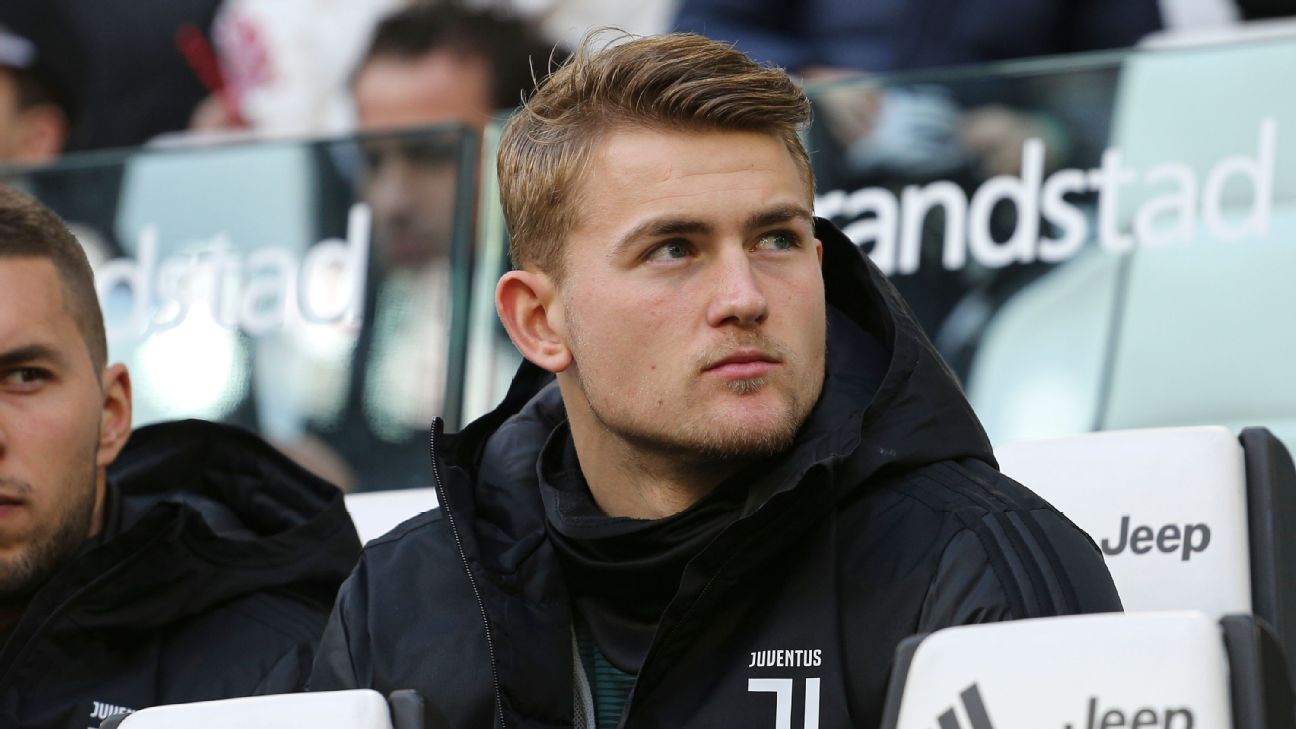 Last month, I grabbed a cup of coffee with a former scout and director of football who worked at several English clubs, and our conversation eventually turned to Matthijs De Ligt. He’s the second-most expensive central defender of all time, at around €75 million ($83.3m) rising to €85.5m ($95m), and yet he hasn’t started a game for Juventus in more than a month. In fact, he’s been benched for Merih Demiral in Juve’s last five matches.

I suggested that De Ligt is an undoubted talent, that it’s his first year in a new league and with a coach who is new to the team, and that at 20 years of age, he’ll undoubtedly develop.

“You’re probably right,” he said. “But especially when it comes to central defenders, it’s extremely hard to predict the future. We spend huge resources scouting kids and young players and that may be the position where we, as an industry, are worst of all at predicting the future.”

That got me thinking anecdotally. De Ligt is 20, and if the standard we’re going to judge him by is being a regular starter at centre-back for one of the biggest clubs in the world at his age, well … that’s a really high bar.

I tried to think back to the last central defender who was starting in that position at such a young age for a club of that magnitude. There weren’t many. Mats Hummels at Borussia Dortmund and Jose Gimenez at Atletico Madrid came to mind. Sergio Ramos played plenty at centre-back for Real Madrid, as a 19- and 20-year-old, but was then shifted to right-back and did not return to the middle until he was 23.

Take the latest FC 100, ESPN’s annual ranking of players by position. (Yes, you may disagree with many selections — I certainly do — but as a general cohort of top players, it does a solid job.). One thing that strikes you immediately is that other than De Ligt, Gimenez and Ramos (who, as we mentioned, shifted over to right-back for several seasons) not one of them was a regular central defender for a top club at the age of 20. In fact, you’re struck by how circuitous their routes to the top were.

At that age, Virgil Van Dijk was playing for mid-table Groningen in the Eredivisie. He didn’t get to a powerhouse like Liverpool until he was 26, and that was after climbing the ladder via Southampton and Celtic. Kalidou Koulibaly was starting for Metz, who were in the French second division at the time. He then went to Genk and didn’t make it to Napoli until he was 23.

Leo Bonucci was on loan at Pisa and Treviso in Serie B, only arriving at Juventus at the age of 23. Giorgio Chiellini was playing left-back for Fiorentina and only became a regular in the middle for Juve at 23. Inter’s Milan Skriniar was at Zilina in his native Slovakia. Aymeric Laporte was a regular at Athletic Bilbao — not quite a juggernaut, but a regular top-eight finisher in La Liga — yet amazingly, has not yet been capped by France (he would have been earlier this season, if not for his injury). Marquinhos was at Paris Saint-Germain and one of the most expensive teenagers of all time, yet he was sitting behind Thiago Silva and David Luiz in the depth chart. (In fact, the latter was signed in Marquinhos’ second season at PSG in order to start ahead of him.)

It goes further. Harry Maguire is the most expensive central defender in history, according to Transfermarkt. At 20 he was a starter, sure, but in England’s League One. He only made it to a really big club last summer, when he joined Man United at 26. Lucas Hernandez is the fourth most expensive: he was playing left-back for Atletico Madrid at 20 (and mostly from the bench).

OK, I know what you’re thinking: is it much different for other positions? Generally, yes.

Take forwards. Sergio Aguero (Atletico Madrid), Karim Benzema (Lyon, when they were perennial Ligue 1 winners), Lionel Messi (Barcelona) Cristiano Ronaldo (Manchester United), Neymar (Santos), Luis Suarez (Ajax) and Kylian Mbappe (PSG) were (are in Mbappe’s case) regulars at big clubs at age 20. You have exceptions, sure. Pierre-Emerick Aubameyang was on loan at Lille from Milan and kept drifting in and out of the side. Harry Kane was at Tottenham but not getting much playing time. Zlatan Ibrahimovic was still adapting to life at Ajax, but most were on the books at either big clubs or stepping stone clubs. Everybody knew who they were.

It’s a similar story with wingers. From the FC 100, Raheem Sterling (starting at Liverpool), Eden Hazard (starting at Lille, who were French champions and he was Player of the Year), Jadon Sancho (starting at Borussia Dortmund) and Leroy Sane (starting at Manchester City) were all well-established.

In midfield, Bernardo Silva (starting at Monaco), Marco Verratti (starting at PSG), Christian Eriksen (starting at Ajax), Paul Pogba (starting at Juventus) and Frankie de Jong (starting at Ajax) had equally high profiles. Of the rest, most were either attached to big clubs but on loan elsewhere (Fabinho at Monaco from Real Madrid, Casemiro in the Real Madrid B team) or highly touted youngsters at mid-sized clubs (Kai Havertz at Bayer Leverkusen, Angel Di Maria at Benfica, Marco Reus at Borussia Monchengladbach).

Of all the names mentioned above, very few were under the radar. (N’Golo Kante, of course, was the exception: he was in the B-team at Boulogne in Ligue 2.)

Is it a case that central defenders simply develop later? Possibly, though here you get into a minefield of conventional wisdom and cliches. Yes, it’s true that experience is important to central defenders, particularly in terms of reading the game. But strength, speed and athleticism are equally important and they tend to erode over time; if anything, you’d think you’d want to get your quicker, fitter players on the pitch earlier.

It also doesn’t explain why, in this age of supposedly omniscient scouting and free player movement, it took so long for big clubs to realize that even at a young age, guys like Van Dijk, Koulibaly, Skriniar or Bonucci might have had plenty of potential. Maybe they wouldn’t have been ready to start at a big club but they could, at least, have been taken in and sent on loan to develop.

Psychology likely plays a part here. We are far more accepting of a striker, whether young or old, who shanks an open chance over the crossbar, than we are of a defender who fluffs a clearance and concedes a goal. (De Ligt’s debut for the Netherlands — he was just 17 years old at the time — was especially notorious.) Rationally, it doesn’t make sense — a goal you should score but do not ought to count as much as a goal you should not concede but do give up — but that’s just how clubs think. If you play a young central defender and he screws up, you look bad. If you play a young striker and he screws up, he looks bad.

There may also be a sense that, especially at big clubs with plenty of pressure, supporters and media are more tolerant of mistakes by inexperienced forwards than they are of defenders. This would explain why Chiellini had to do an apprenticeship at left-back before moving into the middle, or why Real Madrid — despite seeing Ramos at centre-back for two seasons between 2005 and 2007 — felt the need to bring in two more central defenders (Christoph Metzelder and Pepe) in summer 2007, shifting Ramos back to the flank.

Or it may be that clubs just aren’t very good at evaluating potential among central defenders, particularly when they’re very young. Some are recycled from other positions and only shift to the back in their mid-teens, therefore having to “learn” the new role. Others might have had growth spurts that affected their coordination.

Back to De Ligt. He’s already an extreme outlier historically — captain of Ajax as a teenager, Champions League semifinalist, regular at Juventus — so to put any more pressure on him or suggest he’s not living up to reasonable expectations is simply incorrect. He has achieved and is achieving (yes, present tense) more than 99.99% of his peers, both today and in the past.

It would be more useful if football asked itself just why it struggles so much when it comes to identifying (and trusting) talented young central defenders. And why so many future stars slip through the net, despite their fancy scouting.