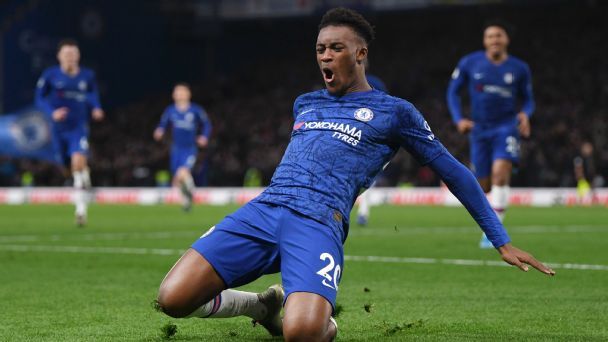 Callum Hudson-Odoi scored his first Premier League goal for Chelsea to cap off a 3-0 victory over Burnley at Stamdford Bridge for Frank Lampard’s side on Saturday.

Jorginho opened the scoring for the hosts on 27 minutes from the penalty spot after Willian had been fouled by Matt Lowton before Tammy Abraham added a second on 38 minutes thanks to shocking mistake by goalkeeper Nick Pope.

Chelsea had lost their last two home matches — against Bournemouth and Southampton — coming into this one.

However, Burnley arrived on a terrible run of form with three consecutive defeats and, although they set up to frustrate Chelsea, they had the ball in the back of the net on 13 minutes when Jeff Hendrick headed in at the back post, only to see the offside flag up.

Just as the visitors were enjoying a decent spell in the game, Chelsea were gifted the chance to take the lead when they were awarded a penalty and Jorginho made no mistake.

Abraham then added a second when he met James Reece’s cross with his head. His effort should have been comfortably dealt with by Pope, who allowed the ball to squirm through his hands.

Hudson-Odoi made it 3-0 four minutes into the second half as he finished from close range following a flick on from Abraham. The goal saw Hudson-Odoi become the youngest player to score a Premier League goal for Chelsea since Carlton Cole in 2002.

“It’s one performance at home and the message has to be continuous, but it’s a nice example of a standard that we have set,” Lampard told reporters.

“I’m not getting carried away. It just feels good, it feels nice to smile in a game and enjoy watching really positive football.”

The win saw Chelsea remain in fourth place, while Burnley are just four points above the relegation zone.

Information from Reuters was used in this report