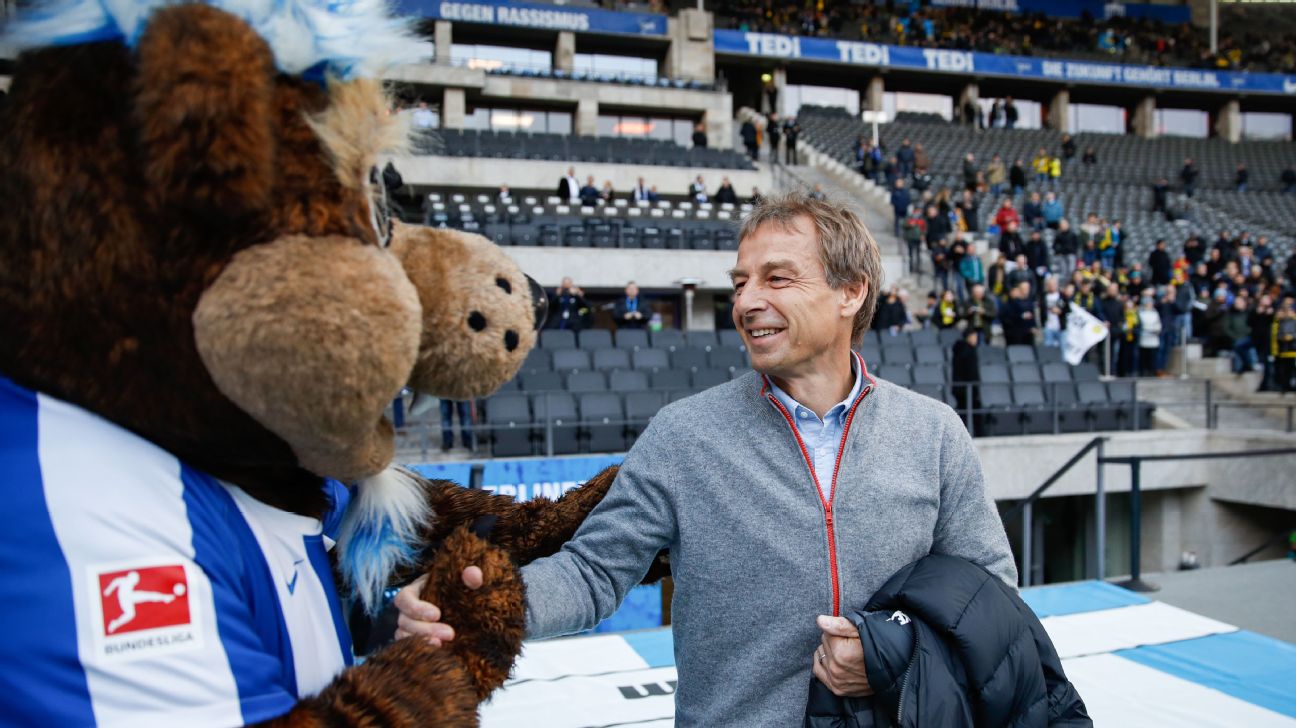 Former USMNT boss Jurgen Klinsmann has failed to present the German Football Association an up to date coaching licence at Hertha Berlin.

Klinsmann, who was announced the new Hertha coach on an interim basis in November, has told Bild he left the required paperwork at his home in California.

If he fails to provide the documents, his assistant coach Alexander Nouri could be in charge of the team, 12th in the table, when the Bundesliga resumes after the winter break with a match against Klinsmann’s former club Bayern Munich on Sunday. Klinsmann has overseen five matches so far, with two wins, two draws and a defeat to Borussia Dortmund.

“When I got on the plane to Berlin, I did not think that I would require my coaching licence and the proof of continuing education because I did not know I would become the Hertha coach,” Klinsmann told Bild.

“And I simply forgot the documents at Christmas. Currently, no-one is at my California home because my wife is at my daughter’s place of study. But I am on the case to provide all necessary documents.”

- ESPN+ gets Bundesliga rights starting in 2020

Klinsmann claimed his licence in 2000 in a special course for players who shaped German football in the previous decade. It has to be renewed every three years by presenting proof and credentials of continuing education and Klinsmann and Hertha Berlin have so far failed to hand in the documents to the German FA.

The head of the DFB academy, Tobias Haupt, told Bild they are investigating.

“We are aware that he worked on his continuing education in Mexico and the United States, for instance. But they don’t focus on certificates that much,” he said.

The German League said in a statement that they confident they would solve the problem “in a timely manner.”

Meanwhile, Klinsmann has said the U.S. national team is in a “very sad” situation at present. The former USMNT boss, who was in charge from 2011-2016, added that he would have qualified for the 2018 World Cup and even reached as far as the semifinals.

In an exclusive interview with ESPN, he said: “So what happened now the last two or three years is very sad. It’s really sad because the team belonged [in] Russia. They belonged in the World Cup. The qualification was pretty much done and then it happened, the big disaster in Trinidad which no one could ever have imagined.

“As I said, I’d take that team in Russia to the final eight, maybe even the final four because there was a building block there and there was a plan for it and the plan got interrupted and it got even more interrupted when the U.S. didn’t qualify for Russia.”