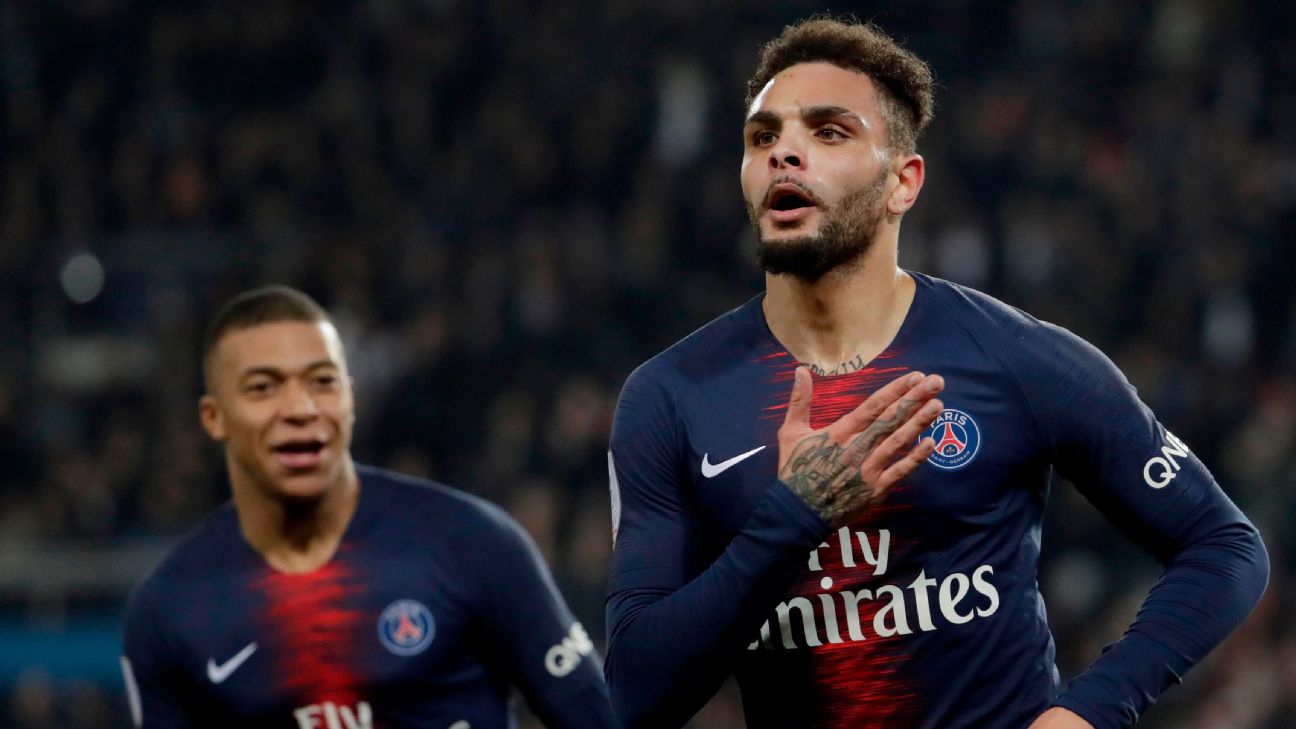 Arsenal’s defence has come under scrutiny this season and they are struggling at left-back while injured duo Kieran Tierney and Sead Kolasinac recover. That means the Sun is linking them with a new arrival in that position: PSG star Layvin Kurzawa.

Former Arsenal manager Unai Emery was keen on Kurzawa but was unable to pull off a deal for the France international. However, now he’s a free agent in the summer, Kurzawa’s price is down around the €8m mark and the Gunners are confident of making a move.

Mikel Arteta is also keen to bolster central defence and the Sun claims that Getafe centre-back Dakonam Djene is on the radar.

Djene, 28, is also wanted by Premier League quartet Tottenham, Everton, Bournemouth and Crystal Palace, but Ligue 1 side Monaco are closest to signing the €25m-rated Togo international and have already had a €15m bid rejected.

Ruiz-Atil is clearly one for the future, but the Blues are moving to tie him down now before other clubs get interested.

11.12 GMT: Xavi Hernandez has confirmed he turned down an offer to coach Barcelona as it is “too soon” in his managerial career.

Barcelona appointed Quique Setien as Ernesto Valverde’s replacement after Xavi, who is coach of Qatari team Al-Sadd, declined the offer to return to the club where he won the Champions League four times and La Liga on eight occasions.

10.45 GMT: Manchester United are confident of agreeing personal terms with Bruno Fernandes but the transfer still hinges on finding an agreement with Sporting Lisbon, sources have told ESPN.

United have held talks with the Portuguese side about signing the midfielder this month but a deal between the clubs is yet to be reached.

Sporting value Fernandes at around €80m while United are keen to pay closer to €60m.

10.20 GMT: Former Arsenal and Bayern Munich forward Lukas Podolski has caused a stir in Malaysia by turning up at the Super League champions, Johor Darul Ta’zim.

Podolski, 34, plays at J1 League outfit Vissel Kobe at this point in time, but it seems a move could be close.

10.06 GMT: Manchester United’s move for Sporting Lisbon midfielder Bruno Fernandes seems a formality, but is he the right player for the club?

09.32 GMT: Barcelona haven’t had the best of times trying to sign young players in recent years — remember their FIFA ban?

But, according to Mundo Deportivo, they are keen to land Cerezo Osaka’s Jun Nishikawa when he turns 18.

Nishikawa plays for Japan’s U20 side and Barca came across the youngster when scouting Hiroki Abe, who signed for them in the summer from Kashima Antlers.

09.11 GMT: Sevilla are on the verge of signing Moroccan striker Youssef En-Nesyri from Leganes, according to Cadena Cope radio.

The La Liga side are eager to strengthen their attack with the imminent departure of Javier ‘Chicharito’ Hernandez to LA Galaxy and will pay the €20m release clause to land En-Nesyri.

En-Nesyri, 22, has scored four goals and set up two more in 18 league appearances for Leganes. He is tied to the Madrid outfit until June 2023.

08.52 GMT: Germany striker Timo Werner has dismissed the possibility of leaving Bundesliga leaders RB Leipzig anytime soon, but he has said he would be keen on England as a destination when he does eventually move.

“The Premier League is the most interesting league, if we’re being honest,” the 23-year-old told Bild. “There are several Bayern Munichs and Real Madrids there. I also really like playing in rainy weather, so England generally wouldn’t be too bad!”

08.29 GMT: Spanish goalkeeper Pepe Reina has spoken of his delight at returning to the Premier League on a six-month loan at Aston Villa, and hinted that he may see his future away from parent club AC Milan

“Here I have the opportunity to play every week and return to feel like a footballer,” the former Liverpool No. 1 told Onda Cero radio. “I’ve joined until the end of the season and will do all that I can to help Villa defend its [Premier League] status.

“I signed for AC Milan a year and a half ago. The situation then was that [Gianluigi] Donnaruma was going to leave but in the end he stayed. That is why I tried to give my best to play and help Gigi grow.

“I’ve been lucky to play in four different leagues and get to know four different cultures. But in the end, the league in which one feels more like a footballer is the Premier League, where I’ve had my best years as a sportsman.”

08.00 GMT: Ashley Young‘s hopes of leaving Manchester United for Inter Milan this month has suffered a setback after Roma left-back Leonardo Spinazzola had a medical with the Italian club on Wednesday.

A move to Serie A had been on the cards for Young, who is out of contract in the summer.

The BBC reports that Spinazzola was with Inter yesterday to complete a deal which would see attacker Matteo Politano move the other way.

However, reports in Italy claim that Spinazzola’s injury history may delay or even scupper the move.

Newly re-appointed West Ham United boss David Moyes is seeking a reunion with Chelsea midfielder Ross Barkley on loan, according to the Mirror.

Moyes was in charge at Everton as Barkley came through the club’s youth system, with the England midfielder then making the switch to Chelsea in 2018.

The stacked midfield at Chelsea — with the likes of Mateo Kovacic, N’Golo Kante, Mason Mount, and Jorginho — has left Barkley in a lurch at Stamford Bridge and could potentially leave him out of favour in Gareth Southgate’s England squad for Euro 2020.

Should Barkley make the short-term commute switch from West London to East London, it could help him get back into the swing of things with the Three Lions. And if not, then Moyes has other plans to reinvigorate the Hammers — including perhaps a move for 23-year-old AC Milan midfielder Franck Kessie.

Atletico Madrid have their sights set on striker Edinson Cavani, and while they’d like to get the 32-year-old in January, they’ve so far been unable to come to an agreement with Paris Saint-Germain.

The PSG board claim that Cavani has a role to play in the second half of the season, despite the fact that he’s featured in exactly half of the club’s Ligue 1 matches this term. The club is also reportedly concerned about fan reaction to selling their all-time leading goal scorer for such a paltry sum.

The Uruguayan has only six months remaining on his contract at Parc des Princes, but that hasn’t stopped the Parisian outfit from setting the asking price at €30m, according to Marca. Atleti, so far, have offered just €10m.

When asked about Cavani’s situation, PSG coach Thomas Tuchel said Wednesday: ”I have already explained Edinson’s situation many times. It has not changed. I do not want him to leave as it is better for us to be with him to achieve our objectives — clearly.”

Negotiations are expected to be protracted and, should a deal not be finalised this month, “El Matador” could well move to the Spanish capital on a free transfer come the summer.

Donny van de Beek is set to reject a new contract with the Dutch giants in favour of a move away from the club this summer, The Telegraph reports.

While Dutch outlet De Telegraaf reported yesterday that Van de Beek has rejected interest from Manchester United to agree a €55m summer move to Real Madrid, it still appears as if Ajax are holding out hope they can change his mind in the form of a big contract offer.

If this new report is to be believed, however, the youngster appears to be ready to test the waters with other top European clubs.

Tottenham Hotspur have also shown interest, but the jury is still out on where he’ll end up.

- According to Tuttomercatoweb, Manchester United defender Marcos Rojo threw a spanner into the works of the club’s potential deal for Bruno Fernandes after telling them that he did not want to join Sporting Lisbon in return. The report suggests that the Argentine will still be leaving Old Trafford in January, but not as a factor in this transfer.

– Wolves are close to finalising a deal for Ecuadorian youngster Leonardo Campana, according to Spanish outlet EFE. The deal will be done next week, with the 19-year-old then making the move from Ecuadorian club Barcelona SC to the Premier League side. Campana has been referred to as the “Joao Felix of South America” by Portuguese agent Jorge Mendes.